Pegasus Has Landed
Face Hunter A is one of the 5 main Face Hunters.

Face Hunter A is a tall and muscular man with long legs and orange hair that stands up. His attire consists of a shirt with a v-necked collar, and a green undershirt underneath. He wears a brown pair of long pants and a belt with black shoes. On his arms he also wears two black wrist towels.

As a face hunter he has no problem bulying weaker kids. He doesnt tolrate tradors and has 100% loyalty to Kyoya. 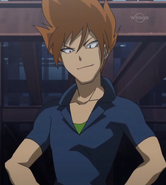 A with his beyblade Rock Raven 145HF

Face Hunters freaked out
Community content is available under CC-BY-SA unless otherwise noted.