Start a Wiki
Flame Bull 100F is an Attack-Type Beyblade and a variation of Dark Bull H145SD. It is only available in the Face-Off Pack, "Lion Gale Force Wall" with a recolored version of Rock Leone 145WB and the Attack 3-Pack with Storm Aquario 100HF/S and Cyber Pegasus 105F(legend).

The face on this Beyblade depicts a Bull, which is represented by Taurus in the Zodiac symbols, and is one of the 88 constellations in space. The bolt shows the bull as angry and appears to be rushing forwards It's coloring is slightly different from its MF counterpart. The Face Bolt is yellow with a sky blue bull on it.

Bull's original release color is red, and features a two-winged design with two small openings between each wing. It is the second heaviest Clear Wheel for right spin beyblades with excellent weight distribution. This makes it one of the best choices for HWS based Defense and Stamina customizations. This Energy Ring is a deep opaque orange.

The Fusion Wheel, Flame was first released with Flame Sagittario C145S. It is predominantly circular, with two small spikes and two additional smaller gaps on its circumference. The Wheel is relatively thin throughout, with the very edge of the Wheel being slightly thicker. Due to the design of Flame where the Wheel’s perimeter is raised slightly, more of the Track below is exposed compared to other Wheels, hence making it easier for other Beyblades to strike its Track. This significantly reduces its Defense capabilities.

100 is currently the third lowest Track available. Its low height allows Attack-based Wheels such as Storm to make good contact with opposing Tracks and Wheels. It avoids floor scrapes better than 85 and 90, but not as good as 105.

The Flat Bottom has a flat tip, which gives it an offensive movement pattern. It is the Metal Fusion Beyblade equivalent of Flat Core (HMS) or Flat/SG Flat (Plastic). It is outclassed by tips such as; RF, R2F, MF, XF ect. 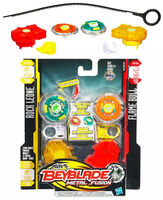 Flame Bull in the Lion Gale Force Wall 2-Pack
Add a photo to this gallery
Retrieved from "https://beyblade.fandom.com/wiki/Flame_Bull_100F?oldid=312165"
Community content is available under CC-BY-SA unless otherwise noted.