The face on this Beyblade depicts a Bull, which is represented by Taurus in the Zodiac symbols. Its coloring is slightly different from its MF counterpart.

Bull is among the heaviest Clear Wheels available, and also perfectly balanced, making it very popular in Defense and Stamina combos. Generally it is a translucent dark red, but in this case it is translucent blue.

The Metal Wheel Flame was first released with Flame Sagittario C145S. It is predominantly circular, with two small spikes and two additional smaller gaps on its circumference. The Wheel is relatively thin throughout, with the very edge of the Wheel being slightly thicker. Due to the design of Flame where the Wheel’s perimeter is raised slightly, more of the Track below is exposed compared to other Wheels, hence making it easier for other Beyblades to strike its Track. This significantly reduces its Defense capabilities.

Although 85, 90 and 100 have been proven to be better options for most Attack types, 105 is still a decent option if the aforementioned Tracks are unavailable.

Wide Ball is with a larger spherical surface, hence “wide”. Due to this, it is an improvement over Ball in terms of Defense. This is because of the greater surface area in contact with the Stadium floor at any one time. However, because of this wider contact area, the Bottom also causes more movement compared to Ball. This is disadvantageous when facing an Attack-Type, because the Defense customization is closer to the Stadium exits, hence increasing the chances of a KO. To prevent this, many launch Wide Ball-based customizations so that the Beyblade stays in the center, while retaining the Defensive qualities of Wide Ball. However, if you use a Metal Face, you can launch at full power. Since it moves around, it is best used as a destabiliser, which is what makes this a good Bey. 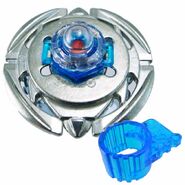 Bottom view of Flame Bull with tool.
Add a photo to this gallery
Retrieved from "https://beyblade.fandom.com/wiki/Flame_Bull_105WB?oldid=380732"
Community content is available under CC-BY-SA unless otherwise noted.