The Friend's Name is Zeo

Flame Byxis 230WD is a Balance Type Beyblade released as part of the Hybrid Wheel System. It was released in Japan in November 2010 for 787円.


The Face depicts Pyxis, one of the 88 constellations in space. Pyxis represents the mariner’s compass.


Byxis was originally released in a turquoise green color. It is overall round in shape, and has four arrows. There are two large arrows, on which stickers can be placed with the remaining two arrows having a dark blue color. The Energy Ring represents a compass, with four circular symbols to represent North, South, East, and West. Byxis’s unique shape meanwhile allows it to be used in conjunction with certain Fusion Wheels to expose their contact points more prominently, thus resulting in higher attack power.


The Fusion Wheel Flame is predominantly circular, with two small spikes and two additional smaller gaps on its circumference. The Fusion Wheel is relatively thin throughout, with the very edge of the Fusion Wheel being slightly thicker. Due to the design of Flame where the Fusion Wheel’s perimeter is raised slightly, more of the Spin Track below is exposed compared to other Fusion Wheels, hence making it easier for other Beyblades to strike its Spin Track. This significantly reduces its Defense capabilities. However, the raised perimeter allows slightly more wobbling time, as the raised Wheel reduces floor scraping.

Flame Bull DF145SD was a competitive Stamina customization, however it has been outclassed by Burn Bull DF145SD.

Main article: Spin Track - 230
230 is the tallest Spin Track released in the Metal Saga toyline. It was first released with Flame Byxis 230WD as part of the Maximum Series, and was advertised as the "Maximum Height" for Spin Tracks. 230 has six indents near the top that sharpen downwards to the middle of the Spin Track. 230 is rounder and thicker than other regular Spin Tracks with no gimmicks, in order to protect it structurally when it comes into contact with opposing Fusion Wheels. Its round and smooth shape results in significantly less recoil than if it were based on the traditional hexagonal Spin Track shape.

Since 230 is so tall, it can wobble at great lengths for extra Stamina, defeating various Stamina Type customizations with lower Tracks. From a defensive viewpoint, 230 uses its height as an advantage to protect itself from low incoming Attacks, by protecting the Fusion Wheel from major contact while using the reinforced plastic to absorb most of the shock. As a result of this, 230 can defeat most low Attack customizations under the 120 height when paired with other top-tier Defense parts.

230 also has some notable weaknesses, however. As a Defense Type Spin Track, 230 is extremely susceptible to tall Spin Track opposite spin Attack Type customizations. Additionally, 230 is outclassed by the likes of Triple Height 170 (TH170), which offers the same height and also the versatility of the height change gimmick.

Main article: Performance Tip - Wide Defense
Wide Defense (WD), as its name implies, is the widest (along with Wave Wide Defense (W2D) and Eternal Wide Defense (EWD)) of the "Defense" series of Performance Tips (D, SD, WD, W2D, EWD and PD). The wide surface area prevents the Beyblade from being knocked over easily. In addition, Wide Defense is able to wobble at a larger angle and for a longer period of time than Defense. However, low spin rate is created towards the end of a battle because in the process of wobbling at such a large angle, more friction is made with the stadium floor, thus decreasing its stamina. Although its name suggests defensive characteristics, Wide Defense does not possess any inherent defensive qualities. Wide Defense finds most use in providing increased stamina in combos. 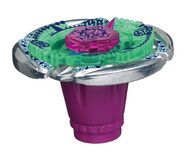 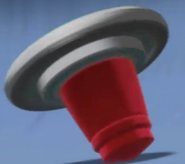 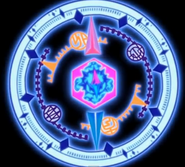 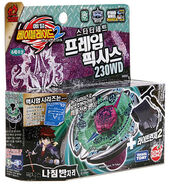