Serpent is based on Serpens, one of the 88 constellations in space. The bolt depicts the deadly cobra showing its fangs and hissing its tongue. Flame Serpent's face is the same as Poison Serpent's face; faint dark red with a green cobra on it.

Serpent is a red wheel, first released with Poison Serpent SW145SD. It has many snake designs, representing snakes. This wheel is a balance wheel, but is also great in attack power. If you look closely at it, you can see 4 fangs. If you look even closer, you will notice that the fangs are below 2 snake heads. Each head is formed by three snakes.

The Flame Fusion Wheel was first released with Flame Sagittario C145S. It is predominantly circular, with two small spikes and two additional smaller gaps on its circumference. The Wheel is relatively thin throughout, with the very edge of the Wheel being slightly thicker, improving Stamina. Due to the design of Flame where the Wheel's perimeter is raised slightly, more of the Track below is exposed compared to other Wheels, hence making it easier for other Beyblades to strike its Track. This significantly reduces its Defense capabilities, however, when used with the TH170, C145 or 230 tracks, it will have good Defensive qualities.

Switch 145 has three wings which can be removed and "switched" to have either defensive or offensive properties. It is switched by removing the Performance Tip and pulling the wings down. Attack is the side with triangle shaped stickers while Defense is the other side. Attack Mode suffers from slightly more recoil. There is not much of a difference between Attack Mode and Defense Mode. You can also remove the wings and turn this Track into a normal 145 Track though the design is different. It is somewhat of an easier way of Variable 145's variant of changing the Spin Track type. This spin track was first used by Poison Serpent. It is red in color.

The Flat Bottom has a flat tip , which gives an offensive quick movements pattern . it is good performance tip for those who do not have HF . it is the Metal Fusion Beyblade equivalent of Flat Core ( HMS ) or SG Flat (Plastic ) . This tip is red in color 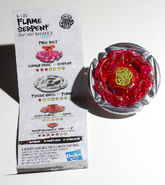 Burning Mirage 2 pack HASBRO .
Add a photo to this gallery

Retrieved from "https://beyblade.fandom.com/wiki/Flame_Serpent_SW145F?oldid=386391"
Community content is available under CC-BY-SA unless otherwise noted.