Flash Sagittario 230WD (Japanese: フラッシュサジタリオ230WD) is a Stamina-Type Beyblade that appears in the anime, Beyblade: Metal Fury. It was released on February 19th, 2012 in Japan and is the evolution of Flame Sagittario C145S. The Hasbro version of this bey will be released in the Hyperblades series in early December 2012. It is currently owned by Kenta Yumiya.

The Face Bolt is basically the evolved version of Flame Sagittario's face bolt. The arrow and eyes of Sagittario have become bolder, and "SGTO" has been removed. It has a bright yellow-orange backround (resembling a flash of light) whilst on a translucent orange face bolt.

Sagittario II has somewhat of resemblance to the original Sagittaro Energy Ring but is more circular with fewer bumps and curves as a result. Sagittario II even bears resemblance to Flame, mostly in it's circular shape and has the stylized 'points' Flame contained. Sagittario II is a translucent gold, similar to Quetzalcoatl and has red, white, and blue decals, similar to that of the flags of many nations. It is amongst the heaviest Energy Rings, which makes it great for Defense customisations. It also has 1 arrows on each side of it.

Flash's Metal Frame resembles the original Flame fusion wheel. It is in an oval shape. It's underside is quite empty, and due to this, weight is lost.

The core clearly resembles the Metal Frame, but looking slightly more like a circle. It retains it's bows and small spikes though.

Flash is able to change modes, 'Attack Mode', where the Wheel takes an oval shape, resembling it's first previous form, Inferno Saggittario. By simply turning the Metal Frame sideways, Flash enters 'Stamina Mode' where Flash takes a layered resemblance, looking like it's previous form, Flame Saggittario. Because of the ovular Frame and Core being stacked in opposite directions, this mode looks more like a circle compared to the oval-like shape of Attack Mode.

Stamina Mode doesn't hold too much Stamina to stay up long though, due to the fact that the Wheel has too many points of weight distribution, having about four or five. And since Attack Mode only has two points of weight distribution, not only does it hold more Stamina than Stamina Mode, but is overall much better. However, since Attack Mode is an oval-like shape it catches the wind, thus, reducing rotation speed. It has found great use in Attack customizations, with its minimum recoil. It also does a great job at pushing opposing beys, staggering them into a corner and losing their balance. It also has less chances of being knocked out compared to other top-tier Attack wheels like Variares, Beat, and Fang.

230 is a remarkably tall Spin Track. It is quite thick in order to protect itself from Beys. Because it was designed to force shorter Beyblades to hit the Spin Track, it provides great Defense against low attacking Beys such as Mercury Anubis. It is also currently the highest Track, and its height has made a large impact on the metagame. Before Flame Byxis' release, low-height Beyblades such as the 85 Track dominated competitive play, but the 230 Spin Track is not affected by shorter Beyblades at all, and thus completely defeated the Low-Track metagame.

Higher Tracks such as 130 or higher are recommended for battle against 230. However, 230's main downfall is being attacked by Beys with high tracks that are still lower than 230, such as 145, and Left-Spinning Beys such as L-Drago Destroy F:S. TH170 can outperform 230 though due to it's ability to change height from 170, 195, and 220 and the Sharp series of Performance Tips should never be used with 230 due to 230's height, which causes imbalance through lack of sufficient contact with the stadium at low spin velocities. Despite this, 230 is a great Track nevertheless, and very useful for Defense.

Wide Defense (WD), as it's name implies, is the widest of the Defense series of Performance Tips (D, SD, PD, EWD, W²D). When compared to D, is still contains the gear-like shape and is of course wider with the Sharp tip wider and taller as well. WD also retains the two curved holes D contained but are now thinner, smaller and found on the Sharp tip. WD is a translucent yellow in color.

Being wider brings advantages and disadvantages to WD. An advantage is being able to conserve better Stamina than D and SD, due to the more surface area as well as being able to spin at a lower spin-rate that that of D or SD, which cannot. A disadvantage however, is worse balance than D. The wide shape gives WD a harder time to regain it's balance whereas, D does it much easier. This can be terrible when faced with an Attack-Type, although this should not be kept as a worry as it can be an advantage. This should take into consideration when using a Spin Track such as 230 or TH170. D would be a better choice than WD as it would regain balance much easier to help cope with 230. WD can also defeat Attack-Types with a weak launch in the opposite direction to absorb the opponent's attacks by spin-equalizing.

At release, WD has found quick use as a Stamina Type Tip, much better than D and has become top-tier. However, as many more Performance Tips like CS, EDS, and B:D were released, they have overshadowed WD in some way at least. Despite all of this, WD is still a great Performance Tip for Stamina. Just like the rest of the D series, WD does not carry any Defense potential in spite of its name, rather, WD has use in Stamina. So in all in all, even though WD may not be the best Stamina-Type Tip, it still has use in the metagame and, most importantly, can be a great Stamina-Type Performance Tip, in the right combo. WD gives Flash Sagittario excellent balance. 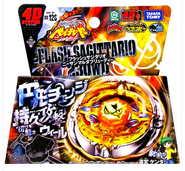 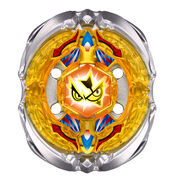 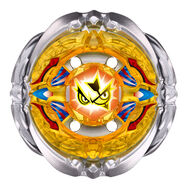 $(KGrHqRHJFMFCg668hfqBQyrT0VLb!~~60 57.jpg
The back of Hasbro's Flash Sagittario

Add a photo to this gallery
thumb|300px|right

A side view of Flash Sagittario after its evolution from Flame Sagittario
ImagesCAA34D0Q.jpg
It's Owner: Kenta Yumiya

Retrieved from "https://beyblade.fandom.com/wiki/Flash_Sagittario_230WD?oldid=247782"
Community content is available under CC-BY-SA unless otherwise noted.