Fusion Hades AD145SWD (フュージョンハーデスAD145SWD, Fyūjon Hādesu AD145SWD) is a Balance Type Beyblade that appears in the Beyblade: Metal Fury anime. It was released in Random Booster Vol. 9 Fusion Hades on December 28, 2011 in Japan. It is owned by Pluto.

The Darkhelm Face Bolt depicts "Hades", the Greek god of dead and the king of the underworld. In Greek mythology, Hades is the brother of Zeus (Jupiter) and Poseidon (Neptune). The design features a helmet-like design, with flames or smoke on the top and right side of the helmet.

The Hades 4D Energy Ring is light purple, almost clear in color. It is a completely round Energy Ring and also contains iron fillings inside it, meant to increase its weight. It has various designs of Hades on it. It slightly resembles Hasbro's Pegasus III Energy Ring. 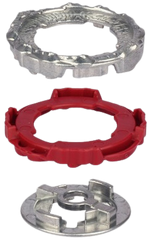 The Fusion 4D Metal Wheel is a three component design with a Metal Frame, Rubber Frame, and Core. The Rubber Frame is made of rubber, which is intended to Spin Steal and absorb impacts from other Beyblades. As with other 4D Metal Wheels, Fusion features a mode change gimmick. Its Metal Frame and its Rubber Frame lock in with a simple square teeth system, and the same mechanism is used for the Core. By switching the position of the two frames, Fusion can switch between "Balance Mode" and "Defense Mode". In Defense Mode, the Rubber Frame is positioned on top, allowing more rubber contact and shock absorption. In Balance Mode, the Metal Frame is on top, with the round shape helping Fusion keep balanced.

The Metal Frame is shaped like a circle with bumps on the circumference. In its center ridge, there are four rectangles cut into it, which allows the Metal Frame to slide into the Core and lock in. There are also two angled parts on each side of the Metal Frame which complete the shape of the shields on the Hades Energy Ring.

Fusion's Rubber Frame has essentially the same shape as its Metal Frame. Its bumps slightly protrude from in between the Metal Frame's.

The Core is a standard shape which has rectangular protrusions to help lock the Metal Frame and Rubber Frame onto it. This part is the only one from the Fusion 4D Metal Wheel that remains in the same position in both modes.

Armor Defense 145 (AD145) is shaped like the head of a funnel, being primarily circular with two curved protrusions that line down in order to act as "armor". There are also two smaller protrusions between it, creating gaps. Like Gravity, even though Armor Defense 145 was intended for Defense Type combinations, it was overshadowed by Spin Tracks like GB145 and 230 as it cannot absorb hits as efficiently and is too light. However, due to this, Armor Defense 145 has found use as a top-tier Spin Track for Stamina combinations because of its unique design.

Sharp Wide Defense (SWD) is a Balance-oriented Performance Tip first released with Fusion Hades and is an upgraded version of Defense Sharp (DS). As its name states, SWD consists of WD fused with S. While it retains the same appearance as WD, it has a hole at it's bottom. The hole reveals the Sharp Tip protruding upwards. This is similar in manner to DS, abeit SWD's surrounding ring is wider. SWD also bears an uncanny resemblance to EWD, minus the free-spinning bearing. This release of SWD is translucent red in color.

In terms of overall performance, SWD is a rather good Performance Tip for Stamina Combinations, as it does well on combos that use Fusion Wheels such as Scythe, Phantom, and Duo, although failing on certain combos; especially against combos that use WD, as well as on combos using Performance Tips of tall-height like TH170. It is also viable to scrapes on BD145, similar to WD and EDS, but appears equal to WD on other occasions.

Overall, SWD is a good Stamina tip, able to hold its ground against other Stamina Combinations.

Engravings of the Metal Frame