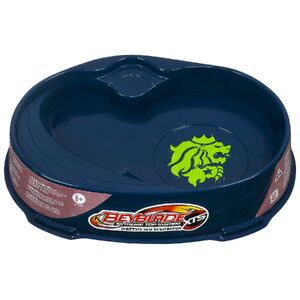 The Graffiti Den Beystadium is a Beystadium designed for and released under the Beyblade: Extreme Top System. Noticeable about it though, is that it carries a different Beystadium design; instead of the usual two-pocket design Hasbro normally creates for it's Beystadiums. It was released only by Hasbro in early 2012.

Unlike a majority of Hasbro's Beystadiums, the Graffiti Den Beystadium uses a new design altogether; in place of the two-pocket design. Now, the Graffiti Den Beystadium has a curved bowl-like appearance, resembling a pear. It has a short slope towards the left which results in going down the Beystadium to the right. At the right, is a tornado ridge; albeit shorter morally resembling a circular plate. On this Tornado Ridge, is what appears to be Fang Leone's motif coloured a lime-green in a paint sort of fashion with various dots and such of paint scorning around the motif, itself.

The Fang Leone motif feels soft while the parts without the motif are instead a more, harder in feel.

There is also some sort of plate where the Beystadium curves which appears to be put in to hold something. It is elevated though and does not seem as if any XTS Beyblade could reach into it.

The Beystadium as a whole is a dark blue, except for the motif. 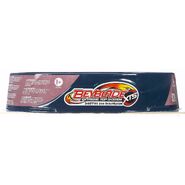 Side view
Add a photo to this gallery

Retrieved from "https://beyblade.fandom.com/wiki/Graffiti_Den_Beystadium?oldid=314386"
Community content is available under CC-BY-SA unless otherwise noted.