May 2013
The Griffin Dragoon Air Synchrome 2-Pack is a Beybattle Top 2-Pack. It has an MSRP listing of $15.99 and was released internationally in May 2013. 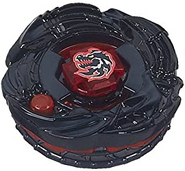