Cruising for a Bruising

Griffolyon is an Attack-type Beyblade and is Robert Jürgens' Beyblade. The Beyblade was re-released in Japan in 2004 as Bakutenryu Etanzel, which was red instead of blue-grey. Hasbro also released "Griffolyon 2" which was a purple version with a purple-and-red griffin figure.

Mainly for looks, this attack ring is average in battle. In the Hasbro version, there are four spikes to attach to the griffin figure.

The Balance WD has a weight which is between that of Wide and Heavy WDs. It's mass is distributed well, and in theory would be used for both Defense and Endurance purposes. That being said, there is numerous other options which are better for those types, and even Balance types which also in theory would benefit from this type of WD have much better choices (such as Ten Heavy).

Blade Base (BB): Griffolyon Base

The base is attached to the spin gear and a screw is required to put them together. The tip of the base is semi-flat. In the Takara version, there are four spikes to attach the base to the griffin figure.

See also Salamalyon, a similar Beyblade that has a plastic figure as well. 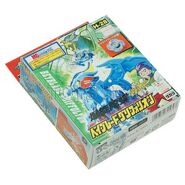 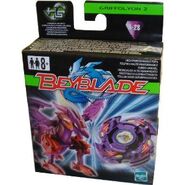 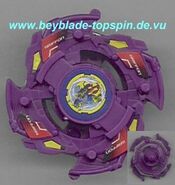 Side View with Bey

2/3 View with Bey
Add a photo to this gallery

With its powerful Smash-Focused Attack Ring and atrocious blade base, comparisons between Griffolyon and Trygle are inevitable. This, however, is not necessarily bad for Griffolyon, as it has a number of advantages over its more popular counterpart, most notably its increased aggression.

On the whole, Griffolyon should not be seen as a mere substitute for Trygle, but a very viable alternative. All serious competitive bladers should own one of the two, if not both.

Retrieved from "https://beyblade.fandom.com/wiki/Griffolyon?oldid=421450"
Community content is available under CC-BY-SA unless otherwise noted.