Gryph Dragooon SA165WSF (グリフドラグーンSA165WSF) is a limited edition Synchrom Zero-G Beyblade created as a special release for the popular Japanese anime and manga magazine: CoroCoro. Although it doesn't have a product code, it is considered part of the Beyblade: Shogun Steel toyline. Only ten authentic versions of this Bey exist.

This displays the CoroCoro Dragon.

Dragooon is influenced by the mythical dragon and it's shown throughout it. Firstly, there is a dragon's head looking left with bright-red eyes, a long snout, with seemingly terrifying teeth, where three are larger than the rest, and protrude to the opposing jaw; a bumped nose is also seen at the top of its jaw. It follows this with a neck curving down with scales. The dragon's right arm lines down and "holds" the white crystal from its Crystal Wheel; four fingers with four claws. Its right wing appears to start with a sharp but small horn and two gaps for flame-like details. It was inspired by the old plastic gen Dragoon.

Performance and Competitive use

Because of Dragooon's weight when synchromed, it is notably the first spin stealer that is difficult to knock out by attackers. This makes Dragooon especially broken, defeating most attack types, most stamina types, and most defense types. Dragooon can effectively use it's weight and left spinning prowess in both defensive setups and agressive setups.

Dragooon is a must have Zero-G Chrome Wheel, defeating over 70% of the game. Dragooon's top usage is for spin steal, whether in agressive setups or defensive setups.

Similar to the Earth Wheel, Gryph consists of eight distinct sections. Four of them have spikes curved in a right-spin direction, and the other half of the sections mostly constitutes of straight boulders. One of the latter sections is however in the shape of an eagle head, with the orb from the Crystal Wheel showing right at the left border of the head.

This Spin Track is the first of its kind and can switch modes to execute a variety of attacks. This Spin Track's roundish part is shaped like a cylinder like cone that has a sharp point like like the ones on a tire, intersecting points to add endurance and possible attack power. The main Spin Track is a basic track that allows attachments on it. It is all colored translucent black. 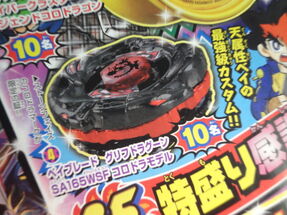 Picture from the CoroCoro magazine.
Add a photo to this gallery

Retrieved from "https://beyblade.fandom.com/wiki/Gryph_Dragooon_SA165WSF?oldid=401892"
Community content is available under CC-BY-SA unless otherwise noted.