The Revizer Chrome Wheel has a wall-like appearance with no obvious attack points, and is very smooth. Even so, it has high recoil. Saramanda would be a better defensive choice.

Revizer can be used in attack combos thanks to its high recoil, although it is very smooth.

Revizer actually seems to be better suited as a balance type Chrome Wheel, thanks to its high recoil.

Guardian is a translucent blue in color, a darker shade than the Pirates chrome wheel.

It is A translucet dark green in color, and is modeled more like 230 rather than 145, unlike many other tracks.

Paired with SB, this track can be top-tier in defense combos when it has absolute middle, but can be suicidal when not in the middle.

160 should always be used if you want your Chrom Wheel to stay off the stadium walls.

It is the same color as 160, and is the opposite of BS, which has a ball-shape with a spike point rather than the sharp-shape and ball point of SB

This tip has a high tilt ratio, and has a perfect balance counter when used with 160. The Chrome wheel will never scrape the wobbling stadium walls if used with the 160 track.

Guardian Revizer's perfect balance counter is perfect, but Guardian should have less recoil if this would succeed as a defense type. 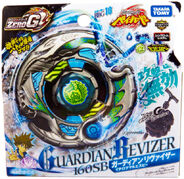 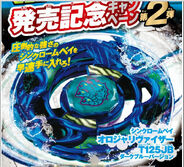 Guardian Revizer is based on the Leviathan, shown by its name. The Leviathan is a sea monster described and appearing in the Bible. However as time passed, the term "Leviathan" became a synonym for any sea monster; one example would be the popular, Loch Ness Monster. In Modern Hebrew however, Leviathan simply means "whale".

In the Bible, the Leviathan appears as a serpentine-like sea monster, which was struck by lightning by God. Once struck, its heads broke into various pieces and then God gave the flesh of it to the people of the wilderness. It is also called the "wriggling serpent" that will be killed at the end of time.

The Leviathan also appears later in the Bible as one of the Seven Princes of Hell; representing envy and is Hell's gatekeeper; Hellmouth.

Revizer is obviously derived by the name, Leviathan. However, because of Engrish, where Japanese tend to change the English characters of "l" to "r" because they sound identical in Japanese; it became Revizer. The "zer" part of the name is unknown where it came from at the moment.

Guardian refers to an individual who protects and defends someone from danger and harm and essentially; serves as their keeper. This fits with the Beyblade, because Guardian Revizer is a Defense-Type.

Retrieved from "https://beyblade.fandom.com/wiki/Guardian_Leviathan_160SB?oldid=177083"
Community content is available under CC-BY-SA unless otherwise noted.