Gwyn Reynolds, also known as Gwyn Ronny (グウィン・ロニー, Gūin Ronī) in Japanese, is the last boss of the anime/manga series, Beyblade Burst Rise. He fights with his Beyblade, Royal Genesis Hybrid, which was later upgraded to Bigbang Genesis Hybrid.

Gwyn is a boy of average height with pale skin, fuchsia eyes, and white hair styled in a side braid. He mainly wears a white jumpsuit with a turquoise fur collar, a sea-green colored jacket that usually hangs over his shoulders, a black tie, white boots, and a gold-yellow belt. When he gets frustrated, his eyes glow and his hair comes loose and becomes long and wavy.

Gwyn's character can be best described as enigmatic. He possesses high intelligence, often drawing arithmetic equations in order to find a way to make new Beyblade parts and figure out new strategies. He is also highly adaptable, as he won his first ever Beyblade Battle despite having never played the sport before and having no prior experience. In his youth, he studied basic formulas by dropping a ball to find out the distance of its bounce. He also ignores anyone he feels is distracting him.

Gwyn is rather introverted and serene; often keeping to himself, soft-spoken and quite apart from people due to his ambition for math. He usually lives in his own lab, regardless of the outside world.

Gwyn is later revealed to have interest in destroying Dante's Bey due to witnessing Arthur's battle, so he appeared kind and friendly, helping Dante to develop his Imperial Dragon Ignition'.

Gwyn is also quite smug and vain; even taunting as he scoffed at Joe Lazure, saying he's stronger than Dante and telling Arthur that he can beat Dante and Delta by himself which increases his ego.

Gwyn is not interested in expressing emotions and relationships. As a result, he does not understand what a Bey Spirit is and believes friendship is meaningless, which is expressed by his inability to understand how Dante becomes stronger in battle when fighting alongside his friends. He is convinced that anything can be solved with math and that he can find the answer to any problem. Because of this, he gets frustrated whenever his predictions do not come true. He also apparently lacked an understanding of modern life, not even knowing how to play a video game and preferred studying more than relaxing. 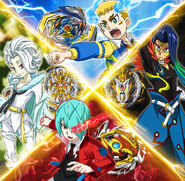 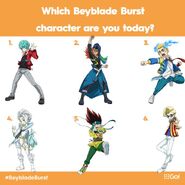 Retrieved from "https://beyblade.fandom.com/wiki/Gwyn_Reynolds?oldid=431831"
Community content is available under CC-BY-SA unless otherwise noted.