Hellfire Delphis 145FS is an Attack-type Beyblade that appears in the Beyblade: Metal Fusion - Battle Fortress video game. It is owned by Kai, a blader that appears the game.

The Face Bolt depicts Delphinus or the Dolphin constellation. It shows a dolphin with Delphis written next to it. It appears on a light-blue Face Bolt.

The Energy Ring is blue in color and has several spikes protruding from it. It is light-blue in color.

The Fusion Wheel is ovular with two sharp ends. The wheel is not smooth; it has some sharp bumps on it.

145, being as tall as it is, makes it easily susceptible to low Attackers; however, this should not be seen as a drawback because normally, Stamina types are not to be used against Attack types. The other two are the TH170 Spin Track (Beat Lynx), 230 Spin Track (Flame Byxis), 160 Spin Track (Guardian Reviser), and the SR200 (Berserker Bigarados) which are taller than the 145 Spin Track. TH170 outclasses it since its 170 has more defense but does not wobble like 230.

FS has a flat tip with a small, spike tip in the center. As a result, when launched at a straight angle, the Beyblade spins with very little movement. However, when tilted, either from the contact of an opposing Beyblade or from the launch, the Bottom moves in an offensive pattern.

It suffers from the same problems as other Balance Bottoms, in that the two qualities are compromised, resulting in mediocre performance in both fields. 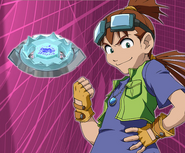 Kai and Hellfire Delphis 145FS
Add a photo to this gallery
Retrieved from "https://beyblade.fandom.com/wiki/Hellfire_Delphis_145FS?oldid=312191"
Community content is available under CC-BY-SA unless otherwise noted.