The Dark Prince of the Nether

Blader
No. 1 Blader in The World (former)
Member of the Turbo 4

Hyde, known as Hearts (ハーツ, Hātsu) in Japan, is a Blader appearing in the anime and manga series, Beyblade Burst Turbo. He fights with his Beyblade Dread Hades 11Turn Zephyr'. He is the younger twin brother of Phi, and a member of the Turbo 4.

Hyde is a tall person with pale skin, razor-sharp teeth, and long lavender-white hair with bangs covering his right eye. And just like his older brother, Phi, he has heterochromia eyes; his right eye being red and his left eye green.

He wears a dark purple collar with silver studs, and a black gloved, bodysuit with dark-yellow lines on the torso, arm sleeves, and legs. The suit also sports violet plating on the arm sleeves, a violet full-connected pauldron, two violet rings around each upper arm and each shin, and a violet belt with a silver and red buckle, which has a purple base, and a white robe with violet borders. The robe is segmented into four flaps: the front one has purple markings on it, the left and right flaps have a silver plating with purple markings, and the last one is pure white. The suit also sports white hexagons with chartreuse borders: three on the pauldron, two on each forearm, and one on the left and right robe flap.

When he activates his Beyblade's avatar, Hyde's hair turns rose pink at the ends and moves like fire.

In contrast to his elder brother, Hyde is wild and extroverted. He expresses his thoughts without hesitation and boasts about how strong he is. He also has a habit of acting like an entertainer: providing enough amusement to the audiences' content, which was shown during his first match with Aiger Akabane. He was also able to predict what would happen with his match against Aiger as well. These traits are a double-edged sword; when he lost to Valt Aoi, he became frustrated. Like his brother, Hyde also possesses the ability to resonate with his Bey, to the point where he is able to feel the damage his Bey receives in battle. Unlike his brother, however, Hyde isn't evil nor as arrogant and has no desire to destroy Beys. He is also far more mature than this brother, such as when he scolded Phi for blaming his loss to Aiger on his Bey and not understanding why he lost.

Another notable trait is that both Hyde and Phi have near-identical blading styles. However, while Phi is right-handed, Hyde is left-handed.

Hyde and his twin brother, Phi were born into royalty and raised together in Dread Tower. Being the younger sibling, Hyde always felt inferior to his brother and believed he could never catch up to him. One day, the twins' butler presented them with a gift from their father: a pair of Beyblades called Dread Hades and Revive Phoenix. Hyde immediately chose Hades, much to the ire of Phi who believed that as the older sibling, that he should have first pick. When Hyde refused to give Hades up, an argument broke out between the twins, which in turn severely strained their relationship. Hyde stayed at Dread Tower, while Phi left for what would later become his quest for destroying people's Beys.

Phi is Hyde's brother in the anime. It is shown that the two are rivals and are highly competitive even at childhood. When they were children Hyde always lost to Phi which resulted in resentment towards him, leading towards him being more intense towards facing his brother. In their battle in episode 41 of Beyblade Burst Turbo, Phi breaks Hyde's bey and steals his bey's energy and uses it to create Dread Phoenix. When Hyde tried to get the pieces of Dread Hades back, he is turned down by his brother. Hyde stays to watch the battle between Phi and Shu and is shocked by Phi's power. Hyde later tried to reason with Phi after the battle, but he refused to listen, hinting that despite everything Phi has done, Hyde still cares about his brother. He makes up with his brother in the final two episodes after Aiger defeats him.

In the anime, Hyde allows Evel to maintain a laboratory at The Dread Tower, even though he seems to know that Evel's loyalty may be shallow.

Hyde seems to have an interest in Aiger due to his strong resonance. Hyde wanted to draw out this power, and so he created a challenge where Aiger had to battle his way through the Dread Tower until he could face him once again. 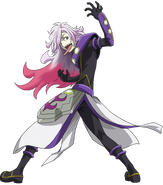 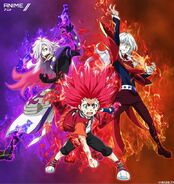 Retrieved from "https://beyblade.fandom.com/wiki/Hyde?oldid=433220"
Community content is available under CC-BY-SA unless otherwise noted.