Dynamis, Guardian of the Temple

Jade Jupiter S130RB (ジェイドジュピター S130RB Jeido Jupitā S130RB) is a Defense Type Beyblade that appears in the Beyblade: Metal Fury anime and manga series. It was released in Random Booster Vol. 8 Jade Jupiter on August 6, 2011 in Japan. It is owned by the Legendary Blader, Dynamis. 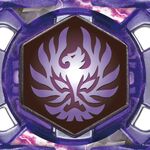 The Face Bolt depicts "Zeus", the Greek god of the sky and thunder. Zeus' equivalent in Roman mythology is Jupiter. In Greek mythology, Zeus is the brother of Neptune (Poseidon) and Pluto (Hades). The design features the face of Zeus formed from Aquila, the eagle that held his thunderbolts.

Jupiter is a four-sided Energy Ring, with a design that represents the plumage and feathers of an eagle (Aquila). Although relatively heavy, Jupiter cannot compete with other heavier and well distributed Energy Rings, such as Cancer, Aquario and Cygnus. Jupiter's shape, which is formed from many small protrusions, is not ideal for any type compared to the rounder and sturdier designs the aforementioned Energy Rings have. Like other 4D Clear Wheels, Jupiter contains iron powder, which was advertised by Takara Tomy to increase the weight of the Energy Ring.

Jade is a 4D Metal Wheel that consists of a Metal Frame and Core.

Jade's Metal Frame has a four-sided design that goes in a left-ward movement. It's design gives it an homage to Wheels like Leone and Rock. Each side on Jade's Core features an oval-like hole with a metal ball encased inside of it. Since Jade features a Gravity Ball gimmick, the metal balls allow it to do so. During spinning, the metal balls will travel to the outside of Jade to increase centrifugal force, but when spin rotation starts to decrease, the balls will come back to the inside and are used for spin-retaining force, to help stabilize the Bey, and take hits more efficiently. Jade's Core also features four other oval-like holes around it; these holes reveal a purple PC Frame-like object inside of it.

Jade's Core is a circular Core with four protrusions sprouting out from it, at four different sides. If one was to looked closely, they would see that Jade's Core has a sun-like design to it, but just in the inside of it. There are also many holes between the sun-like design, with a thin circle lining around the Core to give it its circular look.

Jade has a Gravity Ball gimmick in which it can have fixed balls that stay inside Jade for "Defense Mode" or mobile balls that move around the Wheel for "Attack Mode"; this focuses the weight of Jade to its outside in order to better conserve and improve Attack. For Defense Mode, since the balls are fixed, the Bey moves faster around the stadium, instead of just staying in the center, which has a little bit of attack ability, but is useless for Jade. The Modes can be changed just by sliding Jade's Metal Frame across Jade's Core.

Jade was a very anticipated Fusion Wheel, due to its Gravity Ball gimmick, giving Bladers potential that Jade would be a great Defense-Type Wheel. Despite this, Bladers were very disappointed when Jade was tested. Although Jade had shown some potential for Defense, it was still defeated by Fusion Wheels like Twisted, Variares, Blitz, and Phantom. Thus, it could not hold it's ground well enough for Defense, as well as Stamina.

A reason why Jade may fail, may be because of Jade's total weight, 39.15 grams, whereas top-tier Defense Wheels like Duo and Death, reach into the 40 grams mark. Another reason might be the various holes that Jade creates on its sides while in Defense Mode. Dynamis prefers to have Jupiter in defense mode.

Rubber Ball (RB), as its name suggests, is a Ball Performance Tip, made of rubber. Interesting about it though, is that it is very wide; the widest out of any Rubber-based Performance Tip to date.

Performance-wise, Rubber Ball accels in Defense; comparable to that of Rubber Spike (RS) and Rubber Defense Flat (RDF). While Rubber Ball contains a somewhat aggressive movement, it still maintains a Ball-based movement as well. Its rubber allows it to have better grip on the Stadium floor, and thus take powerful hits from Attack Types. Rubber Ball will move mostly around the middle on the stadium.

While obtaining great results for Defense, Rubber Ball has failed on certain combos, due to its large surface area, which while creating more friction, reduces Stamina and thus, makes it easier to KO than that of Rubber Spike. It is also not suited for Attack Type combos and is terrible in Stamina, like other rubber Performance Tips.

The Gravity Ball gimmick of the Jade Fusion Wheel.

Jupiter and its rings closed