Compared to the rest of the Beyblade franchise, this game represents some unique ideas and concepts that were never carried on into the main Beyblade series itself. It bears more of a resemblance to Pokémon in style and is the only game within the Beyblade franchise which is a true "J-RPG" style. The player goes around the storyline collecting bits and beyblade parts while fighting enemies and progressing throught the game.

Each bit-beast has its own unique attack (though some do nothing until their bits upgrade themselves to their final form) and like Pokémon certain ones also evolve when the bits reach a certain experience (there are 3 stages like Pokemon).

At the start of the game, there are limited things Tyson can do. After getting the rank of "C", the player is given TP, the currency of the game allowing them to purchase items, after winning battles TP is now also awarded not just experience for the Bits. The WBA buildings also become available, here you can exchange stores Beyblades, connect to other players or look at each buildings list of trades.

Each bit also has a typing which contributes a little bit of the battle against other types, much like in pokemon. The types include fire, devil, fighting, rock, electricity,

Tyson has also a "Power meter" powered by "POW" that goes down over time, requiring him to purchase items to restore it. This represents strain on his arms. If the meter runs dry, he faints and returns to his home of origins. IF you are pretty far into a location this means you have to travel back to the location.

Before each match, the player selects the order they wish to use each bit in, the match is done as a best 2 out of 3. They can choose from 6 Beyblades they have set, with 3 being chosen at choice. The same Beyblade can be set for all 3 rounds or the player can use a combination of any of their 6 Beyblades, the choice is up to the player.

At the start of the battle the player has a rip cord on the lower half of the screen which must be tapped at just the right timing with the "B" button. If the player taps too fast and the rip reaches the end they risk resetting the bar. It is often best to tap lightly until the last second and hit a extra tap or two to try for a strong launch.

During battle, a player controlled a spining top, which they viewed from head downwards on the arena. The player was by default in attack mode, but could hold down a "sleep" button which caused the Beyblade to try to rest in the center of the arena. However, the beyblades stats determine if this is a good idea, so some Beyblades are better off being on the offensive and others being in "sleep" mode (the games defensive mode). Each top has a slowly decaying spin cycle and when they knocked into each other, they bounced off each other. The arena itself had a boundaries line, hitting the barriers too many times would weaken the barriers until they gave way, at this pioint it was possible for either you or your foe's beyblades to be knocked out of the arena, losing the round.

There are several ways to acquire new Beyblades, which are known by their Bit chip, different methods have to be used to acquire all the games beyblades.

In regards to the Beyblade storage system, if Tyson has the full 6 Beyblades he will need to get rid of one of his held Beyblades, of which he can just toss via a menu. Doing so will never get that Beyblade back, so the storage is vital to store access Beyblades to avoid losing them. This means players need to be careful with the beyblades they carry and are best never to have the full 6 Beyblades on hand, leaving at least 1 in the WBA building storage.

Evolving bits also can happen either by levelling, or by applying certain crystals, something both. If the player applies the Crystal method to a bit that can also evolve into their next form, they can cause early evolution. Others involve trading with other players.

A certain number of the Bits, such as Kai's Frostic Dranzer, can never be acquired and only appear as recorded entries on the Bit chip book.

Even if you don't understand Japanese, due to the way the game is set up, despite being an RPG it is fairly easy to learn. The game appears more complex then it actually is and other then how to customise Beyblades, the RPG element means you can overcome many difficulties simply by levelling up. So those prepared to grind can spend time levelling up to avoid having to buy Beyblades, though it may take a while to acquire experience.

So long as the Beyblade(s) the player is using is 1 level above the current areas level of Beyblades at least, they can often pull a fair weight in a battle against any Beyblade they meet. For example in the forest the level is 3-6, so bits above level 6 can compete well enough and by the time the level is higher then 7 in this area they should often be able to walk over NPC blades. In short, like many RPGs the game requires some grinding.

Though given as a starter Bit, the player can choose to ignore raising any bit they want, the game is possible to beat with a single bit due to the match choice set up. The player later can do this even for the bit "Spin Dragon" which is featured as Tysons main bit of the game. Unlike Kai who always ends up with his signature Bit ultimate Frostic Dranzer.

How to buy parts; step one locate 24 hours shop

Select "buy" (on the left, the right option is "sell")

Confirm purchase (left option, the right option is cancel trade)
Add a photo to this gallery

If a player does choose to buy parts, inside the 24 hour shop is two machines. The one on the left has the player items and things such as addition Bit chips. It is the one on the right you need for parts. Once you've made your purchase you need to then bring up the games options. On the main menu you pick the top option, scroll to the target Beyblade and then choose the middle option on the next menu to customise. The left option views the Beyblade as it currently is and the right tosses the Beyblade. As mentioned this is aided by most battles being able to win with only 1 invested Beyblade. Due to the battling style, random chance can often be just as important.

To install a part, bring up main menu and select the top option

Select Beyblade to customise, which wll be known by its bit chips's name

Select middle option (left bring up the details and right tosses the Beyblade; never do this!)

The game is liner and you can only go where the storyline wants you to go, if you cannot figure out what to do you just talk to everyone in the current path you have taken. The only time you need to consider backtracking it to get missed Beyblade parts or other itme you didn't buy or for levelling up after each section has been completed.

The gameplay mechanics appear fiddly at the start though can be mastered with effort. Mostly its best to stick to the centre of the Arena, with exceptions. The biggest issue is the Beyblade "bounces" when it hits things, which can make it difficult to control. However, as the Beyblade levels or parts increase in strength, when two beyblades clash the Player's bit will suffer less bounce. If the foe's Beyblade is weaker meanwhile they tend to bounce more off Tyson's Beyblade.

Certain battles may see also special moves used by a blader, including Tyson himself. Not all bit-chip attacks were all that useful. For example Tyson faces one blader whose bit-beast produces a massive hole in the center of the dish, leaving only the outer area left. However, due to a AI error, it was fully possible for the Blader who used it to knock the center out and with it their own beyblade still within the area. If the player happens to have Tyson's beyblade on the left over area outside the hole, it leads to a victory with very little effort. Most special moves could either be exploited or if you knew the bits attack, avoided altogether.

In the 24 hour shop, you find the "POW" items to restore Tyson's power bar, and these are the only necessary item the player needs. Takao will warn the player when his power is low and if it gets too low return to his home at the start of the game. This can be problematic if the player has quite far into an area as Tyson then has to travel back to this location.

POW related items are purchased from the left hand machine in the 24 hour shop. It is best to wait until Tyson gives the warning for the Power meter being below 50%, then purchasing the POW item for 50TP.

There is only 1 puzzle element and this is the forest, wherein you must figure out the path through to find other towns. If you pick the wrong path, you end up in the beginning where you started. 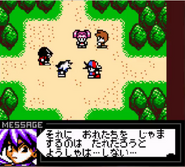 Confrontation between Kai and Tyson in the forest area

Example of one of the many bit-beasts featured in the game. 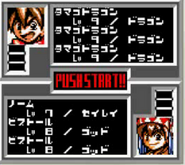 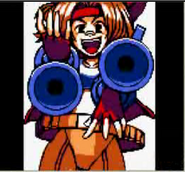 Retrieved from "https://beyblade.fandom.com/wiki/Jisedai_Begoma_Battle_Beyblade?oldid=424376"
Community content is available under CC-BY-SA unless otherwise noted.