It's still unknown what his personality is, but sometimes he's shown with a strange smirk on his face hinting that he may be slightly vain.

Also he normally flips his coin before he watches battles shown in Episode 7. 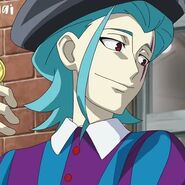 Retrieved from "https://beyblade.fandom.com/wiki/Joe_Lazure?oldid=395113"
Community content is available under CC-BY-SA unless otherwise noted.