Julia Fernandez (ジュリア・フェルナンデス Julia Fernandez) is a character in the Original Series, consisting of Beyblade: G-Revolution. She is a member of F-Dynasty and the older twin sister of Raul Fernandez. Her Bit-Beast and Beyblade is Thunder Pegasus.

Julia has spiky orange hair at the front and really long brown hair at the back. She has green eyes. Her outfit is mainly red and yellow and resembles a Spanish matador.

Julia is a hot tempered girl who uses her bossy nature to push around her twin brother, Raul.

Because she is the oldest and has more confidence than Raul, she claims that she is the strongest beyblader on the team and the one who is holding the team in the competition. Raul has a quiet and shy nature, and therefore, he doesn't go against Julia's commands. He obediently sits on the side lines and watches his sister shine in the spotlight.

Although Julia is bossy with Raul, she claims to work together with him peacefully and says that they never have any fights. Mariah then pointed out that she always bosses Raul around, resulting the two girls getting in a fight about how they treat their brothers.

Julia is actually one of the strongest beybladers in the tournament, so during the team saga, when every team was working together to defeat BEGA, Julia was always the one girl they showed battling along with the boys. She has more determination than any of the other girls, and dedicates all of her time to practicing her beyblading techniques.

Julia is a Spanish girl who was born with her twin brother, Raul, into a circus family. However, since they never call any of the circus employees "mom" or "dad," it can only be assumed that Raul and Julia were abandoned at birth then adopted by the traveling circus. Since then, they were trained to be performing clowns who balanced balls on sticks. Julia was quite talented at it, and often pestered her brother, Raul, because he couldn't do it. That's when the twins met their future coach, who introduced them to beyblades and showed them how easy it was to balance beyblades on sticks instead of balls. From then on, the twins used beyblades in all their acts, and devoted years to learning tricks such as moving their beyblades across spinning ribbons.

After they had gotten good enough with their blades to hold their own in a battle, they entered themselves into the BBA Tournament as "F Dynasty."

Since the rules of the tournament were to battle in tag-team matches, it was perfect for their team since they always battle together. Their strategy consisted of them battling together in the first round, then Julia taking the stage in the next round since she was the stronger of the two, making it a higher chance that they would go on to the next round.

F Dynasty came in third place in the tournament after they were beaten by Tyson and Daichi.

Julia was one of the first beybladers to get a G-Core beyblade because she was qualified enough to handle its immmense power. Julia may have also been chosen to receive the G-Core because of her comment earlier on about how there should be at least one girl on the team since Ming-Ming, who is a girl, was on BEGA's team. Kenny took this into effect and obviously picked her as the strongest of the girls since she could hold her own against the boys. However, Julia wasn't picked to be on the final team to battle against BEGA.

In the manga, she and her brother were part of a noble Spanish family and their grandfather created Beyblades.

Thunder Pegasus made his first appearance in season three of the Beyblade-G Revolution. In the 13th episode "Kenny's Big Fight" he fought for the first time and is the bit beast of Julia Fernandez.

Thunder Pegasus, as the name suggests, is the winged horse from Greek mythology. 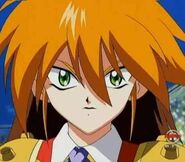 Julia and Raul against King and Queen 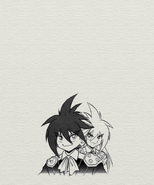 Add a photo to this gallery
Retrieved from "https://beyblade.fandom.com/wiki/Julia_Fernandez?oldid=439449"
Community content is available under CC-BY-SA unless otherwise noted.