Kakeru Tategami is the brother of Kyoya Tategami in the manga. He appears to be 13 to 14 years old. He has fought Gingka Hagane like his older brother, Kyoya. He also has a Motorbike Gang. His bey is Divine Chimera TR145FB.

Kakeru in the manga 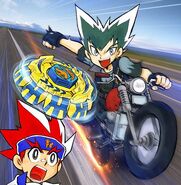 Add a photo to this gallery
Retrieved from "https://beyblade.fandom.com/wiki/Kakeru_Tategami?oldid=437865"
Community content is available under CC-BY-SA unless otherwise noted.