King & Queen (パーツハンター Pātsuhantā) are a team featured in the Original Series, consisting of Beyblade: V-Force.

King and Queen are a twin Beyblading team that goes around and collects Beyblade parts from the bladers they beat. They are not afraid to break the rules to achieve their goals. They only appeared in Beyblade: V-Force.

When they first appear, King challenges Kai to a battle because they wanted Dranzer"s attack ring. During the battle, King reveals his bit-beast, Ariel, but Kai used Dranzer and almost defeated him, until Queen suddenly joined the battle using her bit-beast to help King defeat Kai, and shatter Dranzer into pieces. Seeing no use on a broken Beyblade, they simply walk away.

By the time of the world championship, Dr. K appeared and offered them to join her so that they could gain the power of the sacred bit-beasts, but they did not accept the offer, at first. After that, they attacked a boy, but Kai challenged them before they could destroy the boy's Beyblade. After a fight between King and Kai, both escape leaving the battle undecided. Later on, both of them finally accept to join Dr. K. They challenge Kane and Jim on a beach and destroy their Beyblades, leading to their disqualification on the championship.

In the championship, King & Queen have their first fight against Joseph and Mariam, and even though playing against the rules (both teammates on the stadium at the same time), Mr. Dickenson allows the fight to carry on because Joseph too joins the battle and others request Mr. Dickenson to let them carry on. In the end, both Joseph and Mariam Beyblades are destroyed (except for the attack rings, which are stolen by their adversaries), and King & Queen win. On the next fight, against Tyson and Max, they are defeated. Queen has her Beyblade Gabriel destroyed because the attack ring made by Doctor K backfires, and King joins Tyson in an attempt to stop Dr. K (who was shooting flashlights on Tyson’s Dragoon). At the end of the battle, both of them admit they’ve been wrong (for taking everyone's Beyblade parts) and announce they are now traveling around the world to acquire better experience which Tyson approves of.

In the G-Revolution epilogue (original version only), they are seen having what looks like a championship 2-on-2 battle with Julia and Raul Fernandez of F-Dynasty. 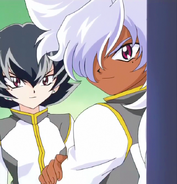 Retrieved from "https://beyblade.fandom.com/wiki/King_%26_Queen?oldid=416998"
Community content is available under CC-BY-SA unless otherwise noted.