Kite Unabara (Japanese: 海原カイト, Unabara Kaito) is one of the main protagonists of the anime and manga series, Metal Fight Beyblade Zero-G. His Beyblade is Guardian Revizer 160SB.

Kite is the older sibling to his younger brother, Eight Unabara. Both take a likening to an element of water and with it, they both own Beyblades of a water element. Kite is a fierce and strong opponent who despite his appearance, can be ruthless and merciless. Kite cares for his younger sibling and is always there to make sure nothing terrible happens to him. Yet if it does, then Eight can surely count on Kite for help and settling the score. He can be seen as the Zero-G counterpart to Kyoya Tategami.

Kite has glasses, brown hair and a long white coat with blue outlines. He wears navy blue pants, a turquoise color shirt with a zig zag patter at the bottom revealing his stomach, and a red tie inside his coat. He has spiky brown hair that stands up and droops down to his forehead. He seems to be a really serious person in beyblade which may make him a good blader. He appears to resemble Yuki Mizusawa.

Kite can be Fierce and Merciless, but he is a very Strong Blader. He likes to be in the defensive position where attacking him just makes his opponents spin decrease. He is smart and can calculate things like the spin speed during battle. But, when his calculations are wrong he breaks down and goes from the powerful defensive position, to attacking rapidly. This is seen in episode 8, When Zeros spin did not decrease as he had calculated. But most of time he is calm and confident.

Kite is first seen at the end of episode 6 with Eight. Eight tells him that Zero defeated him and Kite then pulls up samurai ifriad on his machine. He is interested and decides to challenge Zero. He sends Eight to tell Zero to come to the stadium. When Zero arrives (with Mal, Shinobu, and Benkei) Kite introduces Guardian Revizer and challenges Zero. He accepts and they launch their beys into the stadium. Guardian Revizer goes to the middle of the stadium (also known as the defensive position) and Ifraid attacks him rapidly. But Revizer blocks every attack. Each time Ifraid attacks Kite says how much the spin has decreased. Then Zero has an idea and sends Ifraid up the walls of the stadium, into the air. Ifraid lands on Revizer, pushing it out of the defensive position. Kite looks shocked and says that Ifraids spin speed was less than 30% and that a bey with that curent power could not break the defensive position. Zero says that his calculations were based on out dated information and he becomes stronger each day. Kite tries to get to the middle of the stadium, but Zero blocks him every time. Kite seems to break down and throws off his glasses. Kite then starts attacking rapidly. Eight looks worried and says he is getting reckless, that nothing can stop him from that now. Kites' attacks cause the stadium to rock and Zero sees his chance. Ifraid goes around the stadium and lights on fire. Zero callls out a special move, Blazing Upper and knocks Revizer out of the stadium. Eight grabs Revizer and tells Zero that his brother just got reckless. Kite awakes from his reckless state after Eight spoke. Zero told Kite that he was as strong as everyone says. Kite unstatisfied, challenged Zero to a battle again. Kite then told Eight that it was time for the Synchrom and Eight tossed Kite Revizer and Pirates Orojya. Kite turns his back on Zero and then turns around with a new bey Orojya Revizer. Guardian Revizer with Orojya's chrome wheel instead of Revizer's crystal wheel. Kite and Zero launch their beys again. This time Kite calls out a special move Spiral Crush, causing a whirl pool of water with Oroja Revizer in the middle causing Ifriad to come toward Oroja Reviser. Until it is there and Oroja Revizer hits Ifraid out of the stadium. Winning the match for the Unabara brothers. Then Zero and Shinobu use Synchrom and challenge the Unabara brothers to a battle. Saramanda Ifraid was too much for the brothers and Zero wins. Kite and Eight then join the gang in training. Kite and Eight are seen with others training in the next episode. They each are holding buckets of water with arms spread out. They hold up for a few hours until Eight gives up and Kite falls on his face. Then they join the others on a vacation to the beach. Then a kraken scares the girls and Kite devises a plan to capture it. Kites plan succeeds and they find out that it is just teenager named Gen. Gen reveals his bey Pirates Killerken and challenges them. Kite accepts.

Kite and his brother Eight Unabara

Kite in the opening theme.

Kite's First Appearence in the Anime 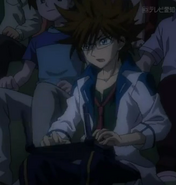 Kite on his laptop.

Kite at the End of Zero G Episode 6 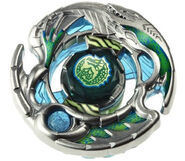 Kite in the manga as a silhouette.

Eight freaking out while Kite being calm on his laptop.

Retrieved from "https://beyblade.fandom.com/wiki/Kite_Unabara?oldid=184859"
Community content is available under CC-BY-SA unless otherwise noted.