Kumaji along with his brothers, are often referred to as the Orso Brothers, they all own the same beyblade with only slight variations of colours and work for Dark Nebula. Together though, they complete each other in their brutality and do not hesitate to stamp on the opponent with all their strength. Later, they become snacks for Ryuga. Kumaji is a minor character.

He along with his brothers generally look quite 'lumberman-like', and they are obviously very stubborn. As brothers, also, they do get angry at each other for simple things like losing. Both the younger brothers look up to Kumasuke.

Bear is the beast inside Rock Orso. 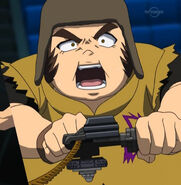 Kumade Brothers with their Beys

Kumade Brothers after losing to Tsubasa

Kumade Brothers in Metal Masters
Add a photo to this gallery