L-Drago Destructor F:S (エルドラゴ デストロイ エフ：エス , Erudorago Desutoroi Efu: Esu) is an Attack-Type Beyblade released on April 23, 2011 by Takara-Tomy in Japan after Fang Leone 130W²D. It was featured in Beyblade: Metal Fury as the evolution of the Meteo L-Drago LW105LF, owned by the series' deuteragonist, the powerful Dragon Emperor, Ryuga.

This Beyblade implements the 4D System and comes complete with the new "F:S" 4D Performance Tip, which changes its Performance Tip from HF to S when it's stamina is low. Its "L-Drago Destroy" Fusion Wheel is also the first to be constructed with the Metal Frame fitting over the Energy Ring as one unit. These parts can be arranged between two different performance modes with an unique attack option for each: Attack Mode and Absorb Mode.

The Face Bolt depicts Draco, one of the 88 constellations in space. The design is similar to Meteo L-Drago's Face Bolt with the difference being a lighter blue hue. It also makes L-Drago show both of its hands to make it look more ferocious. The dragon is also more detailed than the other L-Drago Facebolts.

This Metal Wheel is made up of two parts: a Core and a Metal Frame. Unlike other 4D Metal Wheels, the Core is made of rubber/plastic and sits below–rather than above–the Metal Frame, which comprises the bulk of the Metal Wheel. This follows the trend of the other L Drago Wheels.

The Metal Frame is the largest part of the Metal Wheel and therefore makes the most contact with opposing Beyblades. Like previous L Drago Wheels, the three-sided Metal Frame is shaped to resemble three dragon heads. It is much wider, has larger gaps between each head, and is significantly heavier than each of the former L Drago Wheels, many of which were notorious for their extremely light weight. While made entirely of metal, it was given a gunmetal finish upon release. Its relief features some slight, jagged bumps instead of being very smooth, to create an overall fierce design.

L-Drago Destroy's Core is made of PC (plastic) as well as PVC (rubber), continuing the trend started with Meteo L-Drago. It is comprised of six protrusions which act as the teeth and lower jaw for the dragon heads; all six contain rubber, but only three expose rubber on the outside, while the other three expose plastic. The rubber protrusions can assist in spin stealing from right-spin Beyblades.

Like all 4D Metal Wheels, L-Drago Destroy features a mode-changing gimmick. It works by rotating the Metal Frame while the Beyblade is disassembled. The two Modes are:

Attack Mode is widely considered to be superior to Absorb Mode for Smash Attack. The rubber protrusions on the Core are covered for the most part by the dragon heads while in Absorb Mode, allowing for the plastic protrusions to make the most impact in combination with the Metal Frame. In Attack Mode, L-Drago Destroy can be considered an upgrade to the popular Lightning L-Drago, but it has since been outclassed generally by Metal Wheels like Blitz, Flash and VariAres.

Use in Attack Customizations

Though it has less pure Smash Attack power than Metal Wheels like Flash, Blitz and VariAres, what L-Drago Destroy does have is less Recoil. This can make it a somewhat more reliable choice to play against Stamina customizations, which do not necessarily require the same huge amount of brute force to be KOed as the force found in Blitz and VariAres. The customization MF L-Drago Destroy BD145MF can be used for this purpose; the reliability of L-Drago Destroy and the controllability of the MF Bottom combine to make a usable Smash Attacker versus lightweight and tall Stamina customs.

Final Survive acts as a Hole Flat/Sharp, but is automatic, and uses centrifugal force to switch modes. Its a supposed upgraded version of the HF/S performance tip. At first it performs like a Hole Flat and then switch to a Sharp when it starts to lose its Stamina. The Final Survive 4D Bottom may also cause the Bey to crash on the stadium's walls so that it could hit the opposing Bey in the middle or anywhere else in the stadium. When switched to S with L-Drago Destructor's Absorb mode, it is supposed to become a powerful tank, because of L-Drago Destructor's left spinning ability and the rubber, it can steal spin from other beys. However, it does not absorb much on S mode as it has little friction to steal spin as it absorbs spin better on HF. It is supposed to be the opposite of F:D.

The L-Drago series is known for having powerful Attack skills, and L-Drago Destroy lives up to this aspect, being commonly regarded as superior to Lightning L-Drago due to its increased weight, Attack range, and its more prominently exposed wings. L-Drago Destroy does not Spin Steal as well as Meteo L-Drago, so the latter should be used for a Spin-Stealing combos though. F:S is useless competitively, but L-Drago Destroy can be used in specific situations. L-Drago Destroy F:S is not a must-have, but it is nevertheless a welcomed addition to any collection.

On Zarkan Island, an island in Indonesia, Ryuga gets confronted by Gingka and Co. Ryuga and Kyoya have a battle and he defeats Kyoya with his newly evolved L-Drago Destructor F:S, which he obtained after his Meteo L-Drago was hit by a piece of the Star Fragment. When battling Fang Leone, L-Drago was knocked into the island's volcano and caused it to grow even stronger because it was fused with the island's fiery lava.

After defeating Kyoya, Gingka challenges him to a battle so he can help in the quest for the Legendary Bladers but ultimately, Gingka loses. He then battles Yuki and although Yuki seems to be winning, Ryuga manages to beat him.

In Sagittario's Blow, Kenta battles Ryuga to prevent him from going back to the dark side. He loses, but inflicts a crack on L-Drago's face bolt in the process.

Now Ryuga has passed on his Beyblade's Star Fragment to Kenta's bey, which helped Flame Sagittario C145S evolve into Flash Sagittario 230WD. This caused Ryuga and L-Drago to disappear. They are now presumed deceased. 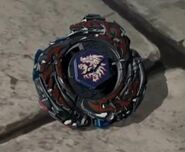 L-Drago Destroy damaged
Add a photo to this gallery 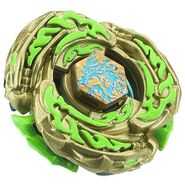 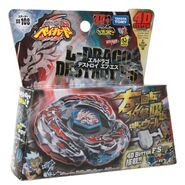 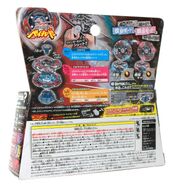 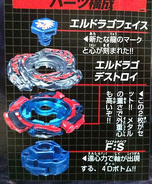 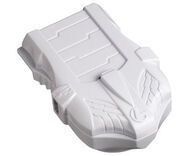 Light Launcher Ripcord
Add a photo to this gallery

Ryuga and his L-Drago destructor F:S

Gingka and co. finding it hard to believe Ryuga is one of the Bladers of the Four Seasons.
Add a photo to this gallery 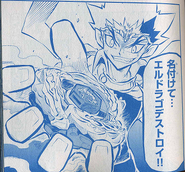 Ryuga with L-Drago Destroy F:S in the manga

L-Drago Destroy F:S in the manga
Add a photo to this gallery
Retrieved from "https://beyblade.fandom.com/wiki/L-Drago_Destructor_F:S?oldid=418535"
Community content is available under CC-BY-SA unless otherwise noted.