L-Drago Guardian D125B is a Defense Type Beyblade released by Hasbro as part of the Hybrid Wheel System. It was released in western countries as a Beyblade: Metal Fury Spark FX Starter Pack for USD$8.99 in the United States.

The L-Drago III Face Bolt depicts "Draco", one of the 88 constellations in space. The design features a dragon facing the left. The Metal Face Bolt version released with L-Drago Destroy DF105LRF (Gold Armored Ver.) is a Chinese dragon head design, facing downwards. This version is the heaviest Face Bolt in the Metal Saga toyline. 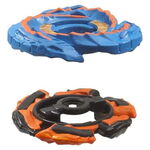 Unlike most Fusion Wheels, L-Drago Guardian also replaces the Energy Ring. It is comprised of two parts, the Metal Frame (Energy Ring) and the Core (Fusion Wheel). It is much wider, has larger gaps between each head, and is significantly heavier than the previous L-Drago Wheels, many of which were notorious for their extremely light weight. The Core contains rubber similar to that of Meteo L-Drago LW105LF, which allows for spin absorption. Unlike the original 4D System version of L-Drago Guardian, this version has a hollowed out Metal Frame. This leads to a much more light weight Fusion Wheel, making L-Drago Guardian one of the lightest Fusion Wheels in the Beyblade: Metal Fury toyline.