View source
watch 01:36
We're Getting Mutants in the MCU - The Loop
Do you like this video?
Play Sound

L-Drago Guardian S130MB is a Defense Type Beyblade that was released in Japan in the Beyblade Ultimate DX Set on November 19, 2011.

This Beyblade was featured in the eleventh volume of Metal Fight Beyblade manga, in the seventh special chapter entitled "Miraculous Tag Team: Ginga & Ryuga!!". It is a manga-only evolution of L-Drago Destructor F:S, where it is temporarily granted this upgrade while inside a virtual reality training simulator.

The L-Drago III Face Bolt depicts "Draco", one of the 88 constellations in space. The design features a dragon facing the left. The Metal Face Bolt version released with L-Drago Destroy DF105LRF (Gold Armored Ver.) is a Chinese dragon head design, facing downwards. This version is the heaviest Face Bolt in the Metal Saga toyline. 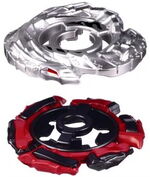 Unlike most Fusion Wheels, L-Drago Guardian also replaces the Energy Ring. It is comprised of two parts, the Metal Frame and the Core. It is much wider, has larger gaps between each head, and is significantly heavier than the previous L-Drago Wheels, many of which were notorious for their extremely light weight. The Core contains rubber similar to that of Meteo L-Drago LW105LF, which allows for spin absorption.

Metal Ball (MB) is a variation of Ball, with its bottom surface made of metal. It has a wide surface area and heavy weight, making it a very versatile tip. The metal surface provides the low friction needed for longer endurance. However, its lack of traction makes it very easy to knockout and destabilize.

With the Beyblade Ultimate DX Set