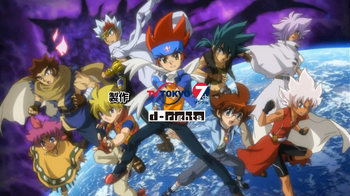 The Legendary Bladers (Japanese: レジェンドダーズ, Rejiendo Burēdā, Legend Blader) are a group of Bladers that appear in the anime and manga series, Beyblade: Metal Fury.

The group consists of 10 Bladers who carry a piece of the Star Fragment enchanted inside their Beyblades. This Star Fragment signifies their status as a Legendary Blader. The Legendary Bladers are destined to choose the World's fate when the God of Destruction, Nemesis, is revived in the modern day.

They completed their mission when they, along with all other Bladers in the world, gave Gingka Hagane, the ultimate power he needed to destroy Nemesis and save the world from an apocalypse. Now, seven years later, they are scouring the world with a new mission: to introduce the game of Beyblade to new Bladers for the future.

This is supported due to an image of the Legendary Bladers that was seen at the end of Beyblade: Metal Fury's Episode 2. Gingka Hagane and Kyoya Tategami were two of the ten shown, the rest are described as: