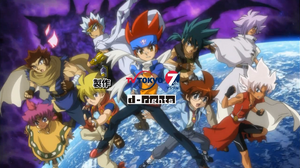 The Legendary Bladers (original version: Legend Bladers) are a group of ten mystical Bladers who have a beam of the Star Fragment enchanted in their Beys. They are said to be able to stop Nemesis, the ultimate evil, from ruling the world. Despite this, they can fight for any side they prefer, either with or against Nemesis. Currently, they are grouped into two different categories, the Bladers of the Four Seasons, and the Solar System Bladers. They are: