This article is about the Takara Tomy release. For the Hasbro release, see Luinor L2 Nine Spiral.

Battle to the Finish! Lost Luinor!

Lost Longinus Nine Spiral (ロストロンギヌス・ナイン・スパイラル, Rosuto Ronginusu Nain Supairaru) is an Attack Type Beyblade released by Takara Tomy as part of the Burst System as well as the Dual Layer System. It was released as a Starter in Japan on December 28th, 2016 for 1620円. It later evolves into Nightmare Longinus Destroy.

Main article: Energy Layer - Lost Longinus
Takara Tomy's Lost Longinus is a wide and heavy Energy Layer designed for Attack that features two large dragon heads, representing the anime's rendition of this Layer's beast, a dragon, that come from the perimeter in towards the center and four wings, two of which are larger and make up the main contact points and two of which are smaller and make up secondary contact points, creating an aggressive, high recoil design. The contact points of the larger wings are molded in the shape of spear heads which are meant to represent this Layer's namesake, the Roman Soldier Longinus of Christian Mythology who stabbed Christ in the heart with a lance.

Lost Longinus has two main gimmicks: The first are the dragon heads as they are made of metal. The inclusion of the metal made Lost Longinus one of the heaviest Layers in the game at the time of release. The second is the fact that this Layer is made to spin Left, opposite to every other Burst Beyblade before it.

The heavy weight of Lost Longinus generates high inertia and with the aggressive design, makes this Layer excel in Knock-Out and Burst Attack potential in Left-Spin vs. Left-Spin matches. However, the Left-Spinning nature of Lost Longinus means that it and a Right-Spin opponent's Layer will spin together like gears if they are of similar spin speed which heavily reduces recoil and rate of Bursts. However, the high recoil shape can still create strong Knock-Out potential in Opposite-Spin matches. Furthermore, it allows for some degree of Spin-Equalization, however not enough to be the primary focus for Combinations.

Lost Longinus features three teeth of medium-high length that are capable of withstanding the recoil this Layer produces, even against another Left-Spin opponent as the heavy weight further increases Burst Resistance as the Layer's higher inertia can better resist teeth skipping.

Main article: Forge Disc - Nine
Nine is a Forge Disc that features nine downward sloping blades that are meant to create Down Force in Left-Spin and Upper Force in Right-Spin, akin to the blades of Boost, albeit reversed. However, the small size of the blades makes any generated Down/Upper Force negligible. Furthermore, the downward sloping nature of the blades increases the risk of floor scrapes and the Forge Disc has an only average weight, so its Knock-Out Resistance and Attack potential lag behind those of Forge Discs such as Heavy, Gravity, 2, 4, 5 and 7.

Main article: Performance Tip - Spiral
Spiral is a flat tip with spikes protruding outwards and pointing to the left, akin to Metal Fight Beyblade's Left Flat Performance Tip. Like Left Flat, Spiral creates high speed, greater than Assault, with its large surface area. However, due to the wide tip and the fact that the tip is made out of plastic, Spiral is incapable of maintaining a banking pattern and the rough perimeter creates poor Stamina issues as well. The tip therefore, essentially spins around its opponent, wasting what little Stamina it has. 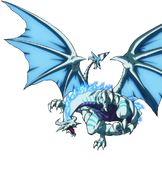 Lost Longinus' avatar in the anime.