Mad Gasher CH120FS a custom Balance-type Beyblade that appears in the Beyblade: Metal Fusion anime. It was owned by Tetsuya Watarigani and was later further customized to become Dark Gasher CH120FS.

The Gasher Face Bolt depicts Cancer; the fourth astrological sign in the Zodiac, its symbol being the Crab. The design of the Face Bolt shows the eye and claws of a crab in a black and yellow color scheme on a red background.

The Gasher Energy Ring is completely circular and was first featured in Random Booster Light Vol.1 - Mad Gasher CH120FS. This version is of a brighter red color, while the BB-55 Booster version is slightly darker. Both are identical in shape and weight. It is molded into the shape of a crabs' claws. It is also one of the heaviest Energy Rings. Its weight makes it an ideal choice for Defense and Stamina Combinations

Mad is the Light Wheel version of the Dark Fusion Wheel. Unlike Dark, which has twelve spikes facing the clockwise direction, the twelve protrusions of Mad are closely packed together with minimal space between each one, resulting in an overall round shape. Such a shape hinders the Light Wheel in two ways: its protrusions are not pronounced enough to provide sufficient Smash Attack, while the perimeter is interrupted too frequently for sufficient Stamina. Additionally, its weight is distributed over too large a surface area. Furthermore, Mad is made of plastic, unlike all other Fusion Wheels that are typically made of metal, making Mad worthless for competitive play.

The Change Height 120 Spin Track (CH120) is unique, as it features a height-changing gimmick. The blader can manually change the height of the Spin Track to either be the height of 120 or 145 . This is done by rotating the bottom portion of the Spin Track and pulling/pushing the central part out/in, and then rotating the bottom portion back to lock the chosen height in place. Importantly, this can be done between each round of a match, as it does not involve any disassembling of the CH120 Combination.

CH120 also has plenty of advantages. The most obvious benefit is allowing the user to change the height of their Combination between rounds. This means that the blader can adapt their strategy to counter their opponent during a match. CH120 is currently the only Spin Track that features a 120 height. This type of height is useful for many Attack Combinations.

Spin Tracks such as T125 or D125 can be alternatives if CH120 is unavailable, but they're not as good. When you change height, at one point you will get medium height. Keep it there, and then screw in the Face Bolt as much as you can without breaking it. The height should tighten and stay as it was. This works only with CH120 and TH170.

The Flat Sharp (FS) is a Balance-based Performance Tip that released via the Hasbro release of Dark Gasher CH120FS. It appears flat but when looked at closely, there is a tiny sharp ball-like tip protruding from the center. If the FS Combinations is launched with enough power whilst the tip is worn down enough, it'll will spin around and then stop in the center, spinning in one place. While it may seem useful, it is outclassed by Performance Tips such as FB and CS, with SF being wider than S but not as wide as any Flat Performance Tip.

In Japan, it debuted in the Takara Tomy release of Dark Cancer CH120SF. The Takara Tomy version produces a movement pattern that, while it is aggressive, is much slower than any Flat Performance Tip. The increased friction with the stadium floor due to the wider tip both increases its Defense and Stamina in comparison to a bottom similar to S or ES.

However, it is in no competition with Performance Tips similar to WD for Stamina or RS for Defense. Semi-Flat is meant to be used in Balance Combinations, as it combines aspects of Attack, Defense, and Stamina. It has very little use, however, as it is slow. 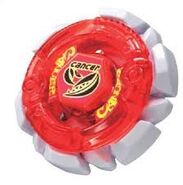 Add a photo to this gallery
Retrieved from "https://beyblade.fandom.com/wiki/Mad_Gasher_CH120FS?oldid=375270"
Community content is available under CC-BY-SA unless otherwise noted.