The Face on this Beyblade depicts Sagittarius, the ninth astrological sign in the Zodiac, which is a creature with the torso of a human and the waist of a horse. It has the letters SGTO printed on the Face Bolt abbreviating the Beyblade's name. It has two eyes with an arrow pointing down on the right, making the second eye look like a bow and arrow.

The regular release of Sagittario is a yellow, translucent piece. It has several notches and protrusions. The design is loosely based on the original Sagittario, which features the two bow and arrows. It goes very nicely with the Flame Fusion Wheel because of Fusion Wheel's arrow points/heads. Its weight is mainly packed at the outside, resulting in good Balance, improving Stamina.

Mad is the Light Wheel version of Dark.

DF145 has four upward wings protruding from the top of the Track, which aside from giving it extra weight, are meant to push air up, increasing stamina. It is outclassed by UW145 combinations; instead, tracks such as AD145, 85, 100, 90, and even 145 are used. DF145's gimmick is negligible. The wings aren't protruding out far enough to create the actual effect it should. DF145 should only be used if AD145 or UW145 not available.

Hole Flat has a very similar movement speed to that of Flat, with the main difference being a slight Stamina improvement due to the hole in the middle of the tip. However, with this comes the detriment of even less grip to the Stadium floor than Flat, and also increased fragility. Due to this, HF dents, and can even break due to this. HF has a good stamina even though it's an attack bottom. HF wears down afterwards. HF is not, therefore, advised for tournaments, unless you have a couple new HFs on hand. 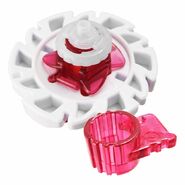 Bottom view of Mad Sagittario with tool
Add a photo to this gallery
Retrieved from "https://beyblade.fandom.com/wiki/Mad_Sagittario_DF145HF?oldid=314614"
Community content is available under CC-BY-SA unless otherwise noted.