Support Parts (サポートパーツ Sapōto Pātsu ) can be customised onto Blade Bases that are compatible with Support Parts. It replaces the parts that make contact with opposing Beyblades' frames. It is only equipped on later Magnacore System Beyblades and Random Booster 8's Ariel 2 (Atari 1). Though what is attached to Gabriel's Blade Base is, strictly speaking, different from Support Parts, they function the same as Support Parts. 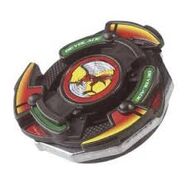 Add a photo to this gallery
Retrieved from "https://beyblade.fandom.com/wiki/Magnacore_System?oldid=311389"
Community content is available under CC-BY-SA unless otherwise noted.