The Magtram was created from an artificial alloy, using rare magnetic elements appearing on the Periodic Table. The MG Core has a similar make-up except it was made with an alternative natural alloy. It offered a less efficient performance than the alloys in the Magtram and proved more difficult to master than the purer Magtram.

The Magtram's is able to manipulate magnetic forces and alter the magnetic field around it when the equipped Beyblade is spun at high speeds. It reduces air drag so when a Blader learns to control the Magtram, it provides them greater manoeuvrability, stability, control and speed. It also has the capacity to accumulate power throughout the duration of a match, before releasing a kinaesthetic burst of energy (built up from friction and movement during the battle, used to strengthen the magnetic field), resulting in higher attack power.

The Magtram is first mentioned in The Magtram Threat but at that point, the Core is inside a Beyblade and cannot be seen. The Beyblade spins in a laboratory tank full of testing fluid while final tests are being conducted by Doctor B, Gideon looking on with a smirk on his face. Little information is given about the actual part until later on.

It resurfaces later in the hands of Slim and Fatso who have been instructed to pass the prototype onto a Blader who would be able to control it. After watching Snakey battle and then slicing an iron plate in half, they decide to give it to him. He masters the Magtram quickly, defeating seven Bladers at one time in a matter of seconds. He loses to Tyson later on but the Magtram proved to be effective against Tyson until he summoned his Dragoon. The data recorded by Kenny and Slim and Fatso aids in further improvements on it's initial designs, and later contributes to the creation of the MG Core.

Eventually, all Bladers from both Team Psykick and Team Zagart are seen using Beyblades with the Magtram or variants of the design. 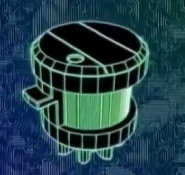 Retrieved from "https://beyblade.fandom.com/wiki/Magtram?oldid=355534"
Community content is available under CC-BY-SA unless otherwise noted.