Cross Dragon is the first Attack Ring ever produced and the first for a Dragoon Beyblade. The center is circular and has four dull protruding spikes arranged to resemble a cross, hence its name. Each spike is designed to resemble a dragon's head with three horns and a long, rectangular curved snout. Cross Dragon is decorated with four thin and curved holographic red stickers, placed between each of the spikes.

Blade Base (BB): Flat Base

Flat is the first Blade Base ever produced. It is white, has a circular and flat tip and is made out of plastic.

Its gimmick lies within its namesake; the flat tip, which causes the Blade to move at wide and fast speeds, which are ideal for Attack Types. While plastic tips do not provide much tractions on Beystadiums, compared to those made of stronger materials like rubber, they offer longer endurance and spin time. 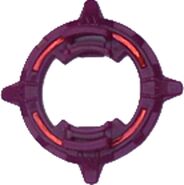 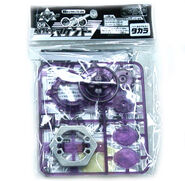 Takara Makendo Package
Add a photo to this gallery

Retrieved from "https://beyblade.fandom.com/wiki/Makendo?oldid=380688"
Community content is available under CC-BY-SA unless otherwise noted.