Upper Dragoon is the best AR for right and second best for left spin Upper Attack (for other Left Spin Upper Attack AR's, please see Dranzer GT's's Triangle Wing). Just from looking at it, you can see why this is. This AR has slopes that slant upwards to lift the opposing Beyblade off of the stadium floor. When this occurs, the opposing Beyblade has almost no Defense ability. They can take critical damage from this, and can be knocked out of the stadium. The slopes are also very long, making it more likely to have a successful Upper Attack.

For Upper Attack to be successful, the slope of Upper Dragoon must be able to reach below the opposing Beyblade. Because of this, using a low BB will make the attack effective against more Beyblades. One of the fastest and lowest BB's available is Dragoon S's Storm Grip Base. Combining these two parts, you can make an Upper Attacker that will repeatedly hit the opponent, reducing its Survival ability and possibly knocking it out. Here is an example combo:

Use in Specialized Upper Attack Customization

A popular strategy with Upper Attack is to create a Beyblade that sits in the center of the stadium and allows the other Beyblade to come to it. When it makes contact, it will be lifted, dealt damage and tossed away until it moves back to the center again. This strategy leaves the opponent with nowhere to go, as the opposing Beyblade cannot make contact with you without damaging itself seriously.

This Beyblade combines Attack, Defense and Survival very effectively. It is hard to knock out of the stadium due to its weight and round shape, has good survival and attacks effectively with Upper Dragoon.

Upper Dragoon is almost perfectly round and is one of the heavier ARs. It can be used to effectively add some attack ability to your defense-type Beyblade.

Use in low friction, high stamina and strong attack Customization

The upper dragoon has a great balance which if the RPM is high enough the blade will have near perfect balance thus the stamina and endurance of the blade will be increased. The strong attack comes from the RPM, the fast you pull the rip cord the faster the blade will spin, add the increased balanced meaning you have a strong attack. The low friction comes from the BB, by using griffolyons BB the friction is low thus when your blade is hit, it gets pushed away but as a result it absorbs the damage, then when your blade moves back for the counter it picks upper a greater momentum from the distance it's traveled, dealing increased damage, this will give you an increased chance of winning. You can use Dragoon f's BB if you want high friction, your endurance will be even further increased but the attack is decreased increasing the chance of you losing.

This beyblade combo is a great customization, but for maximum effect, efficiency and strength replace Master Dragoons AR with Dranzer GT's AR.

This beyblade is often seen in the anime along with the other master beyblades used by amateur bladers without bit beasts.

Bottom view
Add a photo to this gallery 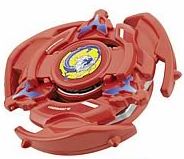 Master Dragoon Copper Version
Add a photo to this gallery

Retrieved from "https://beyblade.fandom.com/wiki/Master_Dragoon?oldid=445996"
Community content is available under CC-BY-SA unless otherwise noted.