Mathilda (マチルダ Matilda) is a character in the Original Series, consisting of Beyblade: G-Revolution. She is a member of Barthez Battalion. Her Bit-Beast and Beyblade is Pierce Hedgehog.

Mathilda has short, pink hair that has two very tall locks of hair pointing out at the top to look like antennas since she gains "butterfly wings," when she beyblades. She also has pink eyes to match her hair. Mathilda is very short and is the shortest out of all the people on her team and all the girls in the tournament.

Like everyone else on her team, wears cool and stylish clothes. She wears a sleeveless, yellow shirt and teal shorts. She has thigh-high purple socks and long purple gloves. She has white boots with black strips on them, and she has a small, sleeveless jacket with black stripes and orange edges. She is also never seen without her goggles with she always wears either on top of her head or around her neck.

Mathilda is very quiet and doesn't speak out much for fear of angering her coach, Barthez. She, along with her team, is kept under strict rules, so she has learned to speak like an army soldier and never say no to an order.

When she is faced with a problem or becomes upset, she doesn't tell anyone, and she spends her time alone, trying to console herself or find an answer to her problem. However, she can never do this because Miguel always finds her and talks things out with her.

Mathilda is always the one who tries to stop fights, such as when her team tried to go against Barthez, but she advised against it since it would cause a fight. Another time was when Julia and Mariah had gotten into a fight over how they treat their brothers. Mathilda, obviously, tried to stop the fight by telling them to quit it, but the girls didn't listen, and Mathilda got roped into doing a three-way beybattle with them.

Mathilda has a crush on Miguel, and therefore, spent more time with him. Over time, she found out how he acts when he's relaxed, and now she isn't scared of him.

Mathilda was given an order from Barthez to destroy her beyblade in battle in order to damage Daichi's beyblade, making it so he wouldn't be able to play in the final round. Mathilda was crushed and tried to talk out her feelings over a bridge. Miguel found her and tried to talk to her, but Mathilda just ended up screaming at him in frustration because he couldn't understand what she felt.

In the next battle, Mathilda caved and ended up following Barthez's orders, destroying her beyblade, Pierce Hedgehog.

Later on in the series, the boys in her group decided to let her beyblade against Raul. She was confused as to how she would do that since her beyblade was destroyed, but the boys quickly answered her question by taking apart their beyblades and putting them together to make a completely new beyblade. Mathilda thanked them, then took the beyblade and went off to battle, but ended up being defeated, which caused her team to be eliminated from the competition. Mathilda's own Beyblade would later be seen completely repaired, presumably by Miguel.

In the Japanese ending, she is seen battling along with Aaron, Robert and Oliver.

Pierce Hedgehog appeared for the first time in the third season Beyblade-G Revolution, in the 17th episode "Battle in the Labyrinth" and is the bit-beast of Mathilda. 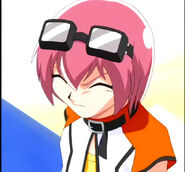 Retrieved from "https://beyblade.fandom.com/wiki/Mathilda?oldid=439622"
Community content is available under CC-BY-SA unless otherwise noted.