The Takara Tomy version is a translucent black while the Hasbro version is an opaque black.

Cross Dragon's design is the same as the other four layered system blades, Makendo and Spin Dragoon.

Blade Base (BB): Flat Base

Megaro Arm's blade base does not have a spin gear instead it has a screw in that its attached to the blade base which is common amongst most first generation plastic blades. 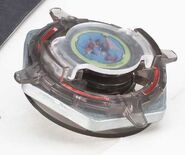 Retrieved from "https://beyblade.fandom.com/wiki/Megaro_Arm?oldid=391530"
Community content is available under CC-BY-SA unless otherwise noted.