Metal Fight Beyblade DS is the first Beyblade video game for the Nintendo DS and is based on the manga, Beyblade: Metal Fusion. It was only released in Japan, and it is very likely to never have an English release due to it being based on the manga which has not been released in North America, and the fact that it uses an outdated system of Beyblades. It was released on March 26, 2009. It was re-released a year later, on March 26, 2010 called Metal Fight Beyblade DS (Sale Price Edition) and came with an exclusive Quetzalcoatl 90WF.

Metal Fight Beyblade DS is a Beyblade video game based on the manga, Beyblade: Metal Fusion. It is similar to past Beyblade games by having to take down your opponent's Beyblade in attacks and finishing moves. It is able to do 2-player versus mode via Nintendo Wi-Fi Connection.

The game follows the story in the manga, Metal Fight Beyblade. Ginga Hagane , a Beyblader searching the country to bring back the Forbidden Bey, L -Drago which was stolen from his village, Koma Village by the evil Katol, leader of Dark Nebula, an organization who wants to use's power to control the world. Gingka goes on his quest with his friends, Kenta Yumiya, Kyouya Tategami and, Benkei Hanawa to stop Katol in his rise to power. 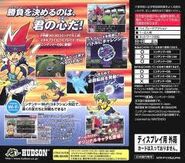 Katol.
Add a photo to this gallery

The story of this game is similar to Metal Fusion's one but this game has 4-layer beyblade, new characters and Katol replaces Doji as a leader of Dark Nebula.

Retrieved from "https://beyblade.fandom.com/wiki/Metal_Fight_Beyblade_(video_game)?oldid=314981"
Community content is available under CC-BY-SA unless otherwise noted.