Ginga and Masamune of Team GanGan Galaxy have just come off a win against China's Team member, Chi-yun Li. But after victory they are met by a new threat who posses power they would never expect; Da Xiang Wang.

Masamune Kadoya succesfully defeat China's representative; Chi-yun Li who got careless in their battle. But Chi-yun is struck over the head and verbally abused by his partener who reveals himself to be none other then China's leader; Da Xiang Wang. Ginga doesn't appreciate Da Xiang's words of punishment that tell Chi-yun he has dishonered China with his failure.

Ginga cheers Chi-yun on by telling him that losing is natural for a beyblade, especially one with great skills such as Chi-yun's. Da Xiang decides to take on Masamune to even the score between the two teams, Masamune is confident that he will take two wins in a row. The battle begins and Masamune goes on the offencive but is surprised when his Unicorno is knocked from the stadium in a single blow from Da Xiang's Giraffe, proving his great strength.

Ginga and Masamune are shocked in disbelief on how much more powerful Da Xiang is then Chi-yun. But Ginga plans to battle for his team and takes on Da Xiang in the deciding round for both teams. Right off the bat Ginga has trouble dealing with Da Xiang's Giraffe's rubber wings. The Rubber on his Giraffe is sturdy to where it can withstand Pegasis's blunt attacks and can even dish out powerful attacks.

Da Xiang perminantly switches to defence mode and begins to gloat about his Giraffe's overwhelming power, during this time Ginga finds the weakpoint in the space betwheen each rubber wing and begins to use percise attacks. Because Da Xiang is not paying much attention to the percision of each strike while Giraffe is not moving, the rubber wings suffer severe damage.

Da Xiang plans to easily counter Ginga's next attack and is shocked when his Giraffe's rubber wings are shattered, leaving it defenceless. With the last ounce of his power, Ginga unleases his final attack and knocks Giraffe from the stadium, winning the match.

Da Xiang is crushed by his defeat and is dissappointed in himself while Ginga celebrates victory. The Beylin bladers reassure Da Xiang that they will learn from their mistakes and continue to become better beybladers for the future of china. Da Xiang stands proud as a changed man, and congradulates Ginga and Masamune on victory. Team Wang Hu Zhong leaves the stadium as the crowd chears them out.

Meanwhile, in the middle east a mysterious beyblader battles Arab's Team Alone. In a two on one match, Karte and Aiden are easily bested by a man named from the ancient emperor; Julius Ceasar.

Da Xiang punishes Chi-yun for being defeated by Masamune

Ginga assures Chi-yun to get back up

Da Xiang is defeated by Ginga 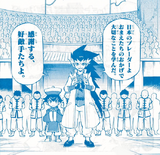 Wang Hu Zhong gracefully accepts defeat and moves on
Add a photo to this gallery
Retrieved from "https://beyblade.fandom.com/wiki/Metal_Fight_Beyblade_-_Chapter_22?oldid=345729"
Community content is available under CC-BY-SA unless otherwise noted.