The Face Bolt depicts a dragon, Draco, one of the 88 constellations in space. It features a further stylized version of the first L-Drago Face; the "L-Drago" text present on the prior L-Drago's face bolt was removed. The "L" slightly resembles a hand.

This L-Drago Rush wheel is translucent white with orange stickers. It has multiple and various spikes that increase its attack power. However, it will also increase recoil. It has two modes, Barrage Mode and Assault Mode. In Assault Mode, the heads cover the claws on Meteo. In Barrage Mode, the heads cover the mouths, creating a look of a full dragon. Barrage Mode doesn't have much difference due to L-Drago Rush's energy ring having no rubber, but it still provides a little more spin stealing.

LF is a mirrored version of R2F, however is made completely of plastic. Due to the nature of rubber Bottoms, R2F is tall relative to plastic Bottoms, and consequently, so is LF. Its rubber counterpart is LRF. LF appears to be a flat Bottom with 6 equal protrusions facing the counter-clockwise direction (when viewed on an upright Beyblade). LF is much faster when it makes contact with the tornado ridge in most stadiums. LF gives an aggressive movement pattern akin to other Flat Performance Tips, however, due to it's jagged form, it is more aggressive than other Flat Performance Tips made of plastic. It also makes a lot more noise compared to other tips because of the hard plastic protrusions hitting the stadium. Like all Flat plastic Performance Tips, it fails to fully retain a flower-like pattern when used with the Sliding Shoot. As a result it has found recreational use for players who wish to have a more controllable Tip than RF/R2F/LRF with increased Stamina. It is one of the fastest Performance Tips available. 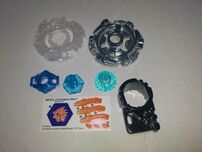 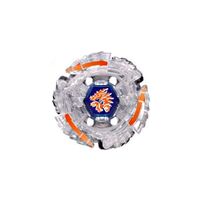