Beyblade Idol
Ming-Ming (ミンミン Ming-Ming) is a character in the Beyblade: G-Revolution anime. She is a member of the BEGA League. Her Bit-Beast and Beyblade is Venus.

Ming-Ming usually portrays herself to be a sweet young girl. However, she has another, tougher side when she blades. It is easy to tell which from her size and by her eyes, hair, and height. Tough Ming-Ming (called Queen Form in Japanese version) is taller, has sharper-edged hair, and has narrow eyes with small pupils, while innocent Ming-Ming (called Loli Form in Japanese version) is shorter, has soft-edged wavy hair, and has big eyes. She tends to spend most of her time in her innocent form as most bladers are easily deceived by her appearance, but when she gets really into a battle, she'll switch to Tough Ming-Ming since it's her most powerful form.

When Ming-Ming transitions from innocent Ming-Ming from to tough Ming-Ming, she is shown to go through a Sailor Moon-like transformation where her clothes glow and change shape while butterflies fly around her. When she transforms from her tough form to her innocent form, both of forms are shown holding hands and keeping close to each other, much like sisters.

When Ming-Ming is in innocent form, she wears a short dress that has a yellow bodice and a frilly, pink cotton. She has heart clips holding up her transparent sleeves, and she has long, white gloves. She wears ruby red dress shoes with this dress. Her buns in her hair are covered by flower clips with yellow ribbons attached. While in tough form, Ming-Ming wears a short, black dress with two hearts on each hip and one big heart on her chest. She wears short, frilly, red gloves and knee-high, navy-blue socks with red shoes. Her buns in her hair are covered by white ribbons.

Oddly enough, despite being her main "theme", it is never mentioned how did she got her transformation power in the first place. The ability is also absent from the manga and she looks in general different.

Her attitude depends on her form, but generally she is a very confident girl with a lot of pride. She often acts sweet while in her innocent form because it gets people to lower their defenses to her. However, while in innocent form, she is also self-centered. She talks about how she is the greatest beyblader in the world and that she's the best singer in the world. While battling someone, she will talk about how she has to go easy on them because she's too strong, especially against boys. Such as when Hilary was causing a ruckus outside the BEGA building, and while BEGA security was hauling her off, Ming-Ming giggled and said that her fans were so loving. Hilary then screamed out that she wasn't her fan.

When Ming-Ming is in her tough form, not much changes. She is still mean and sarcastic, but while she's in this form, she's more concentrated on the battle.

Ming-Ming is a new singing pop diva raising to fame as a both a singer and a Beyblader. Her Beyblade is called Venus, and she works for Boris in the BEGA League. She is the cover-girl for BEGA and is known as one of the most popular idols in Japan. Ming-Ming first became an idol when Boris hired her and used his money to make her popular. In one episode he revealed that Ming-Ming used to work at a fast-food joint before he found her, and threatened her not to step outside the line or else he would send her back to serving fries.

After (and including) the episode, Runaway Daichi, a running gag throughout the season is Kenny's uncontrollable crush on Ming-Ming. He even cheers her on during the BBA VS BEGA match. This obnoxious teen idol provides entertainment in the form of singing the praises of the BEGA organization. Don't let this fool you though, because she is also a top notch Beyblader. She also uses her singing to help her concentration during a match, as well as to distract her opponents.

Ming-Ming was very faithful to BEGA throughout the BEGA saga of the third season, and because she was their poster-girl, she dedicated all of her time into manipulating kids into thinking that BEGA was cool and that they should all join. However, near the end of the season, when the BBA vs BEGA tournament was going on, Ming-Ming and Crusher quit BEGA after seeing how nasty Boris really was. Ming-Ming, being in her Loli form, became scared when Boris yelled at her, and hid behind Crusher for protection, making her seem like the little sister of the group. After leaving the BEGA stadium, Ming-Ming and Crusher went to Tyson's dojo, to weaken him, but Lee and Rick stop them. Mystel and Garland eventually arrived and told the BBA about Boris and what he was planning to do. After that Garland, Mystel, Ming-Ming and Crusher were seen in the stands in the last battle, cheering for the BBA. But after the big battle in the alternate world that Brooklyn created, Brooklyn became good again, so the BEGA Bladers went back to cheering for him, glad that he was on their team and that he's now understanding towards the true spirit of Beyblading.

Ming-Ming's first beyblade is Venus. Venus is a pink beyblade with a base much like Metal Driger. It has a three edged attack ring, a ten heavy weight disk and heavy MG core balance base.

In the anime, Venus (1) is only seen in one episode, during Ming-Ming's commercial and her battle against one of the BEGA training squad.

Venus 2 is Ming-Ming's second beyblade and is a large base beyblade with a four edged attack ring and a 10 heavy weight disk. In the anime, Ming-Ming uses Venus 2 against Daichi Sumeragi and Lee and Crusher. Both blades have been seen to be very powerful and balance based. 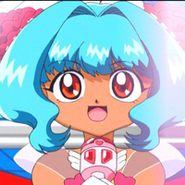 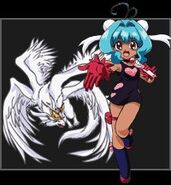 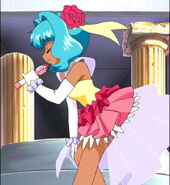