She wear a plain office suit when she is working but at home, she wear a sweater over a skirt and tights.

She is Kai Hiwatari's mother.

She was absent for the entire duration of the Bakuten Shoot Beyblade manga except for a short cameo during Kai's and Tyson's battle in the Super Battle Tournament.

Voltaire Hiwatari
Misaki Hiwatari appears to be good daughter-in-law since she was the one that took care of Voltaire after he collapsed and fell ill. 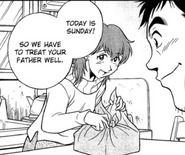 Add a photo to this gallery
Retrieved from "https://beyblade.fandom.com/wiki/Misaki_Hiwatari?oldid=337680"
Community content is available under CC-BY-SA unless otherwise noted.