Nightmare Rex SW145SD is a Balance Type Beyblade that was released with the Beyblade: Metal Masters video game on December 10, 2010 in Japan and on November 15, 2011 worldwide. It is owned by Agito.

The Rex Face Bolt depicts one of the most well known dinosaurs, the Tyrannosaurus Rex. The design of Rex features a skull looking to the left while showing its neck.

Rex, as its name states, is designed in the manner of the Tyrannosaurus Rex's head, neck, and tail on the Energy Ring's two sides.

The Nightmare Fusion Wheel features a three-winged design with a small gap between the wings. The three "wing designs" appear to resemble the "spine" or rather, "tail" of a Tyrannosaurus Rex's skeleton.

Performance-wise, Nightmare isn't so good in terms of Attack potential, as it suffers the same problem as Galaxy; being that the wings curve into Nightmare's main contact points, causing low Attack potential; with Blitz and Flash serving as better options.

Just as the Semi-Flat Bottom has a sharper tip than Flat, so too does Semi-Defense when compared to Defense. Before the release of SD, D was the absolute best Stamina Bottom available, but SD quickly took over the top spot, as is evidenced by the following tests: 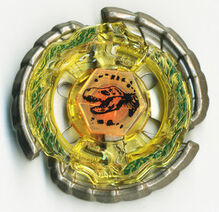 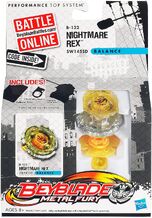 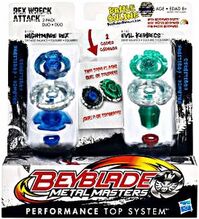 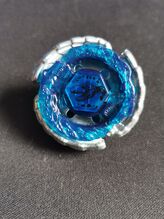