The Octagon Showdown Battle Set is a set to the Hasbro-developed BeyWarriors side-series of the Beyblade toyline. It has an approximate MSRP listing of $39.99 USD and saw release in Fall 2013. 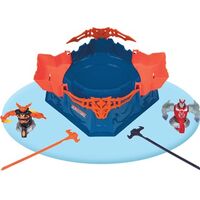 As its name suggests, it will feature an octagon-shaped arena acting as the "stadium" for the BeyWarriors. It was announced via Hasbro's press release for the American International Toy Fair 2013 from February 10 to February 13.

It is said to be "intricately designed" and will allow the Battlers to "spin, crash, and ricochet".