Wyvang represents a wyvern, which are very dragon-like. the stone face comes printed on in a blue color showing a rough depiction of a wyvern's head with an overlapping jaw. The actual sticker shows it to be mostly blue but with yellow piercing eyes

Almost completely circular, Wyvang's shape is only disturbed by curved lines coming from the center and, like claws, going down toward the bottom of the Chrome Wheel. At the top is a smooth gathering of long feathers, while the bottom shows a dragon head from the side, which is where a Crystal Wheel's orb would coincidentally protrude to form a big eye. The stickers for this Chrome Wheel give it a scaled body, as is needed to perfect the wyvern theme.

This Chrome Wheel consists of a ring circled by multiple snakes. These engraved serpents create small protrusions all around Orochi, like a gear. Following the characteristic of all Zero-G Beyblades, Orochi has a hole for the Crystal Wheel's orb to protrude into, and two snake heads encase it from each side with their fangs. Some swirly designs exist in the inner part of this Chrome Wheel, all the way down to the opposite side of the crystal, where a menacing face is formed. Made to resemble a snake's head in a front view, two evil eyes are engraved as well as small fangs near the edge of Orochi, and that big head's apparent mustaches are prolonged to become the many small serpents encircling the rest of the Chrome Wheel. This wheel could be useful for defense in the synchrom combo MSF-H/MSF Orochi Kraken GB145/ED145RS/CS. Also most parts are covered by serpents and/or sea snakes.

145 is the fourth highest Track available, along with the various other 145-variants (C145, DF145, AD145, TR145, ED145, UW145, BD145, WD145, SW145, CH120/ 145, R145, GB145, Etc.). It can be used in Stamina customizations to great effect due to its tall height, which allows for more wobbling as the Beyblade loses its spin velocity, but that being said, DF145 and UW145 has this same effect but also the added bonus of its “Down Force” which while negligible, stabilizes the Beyblade it is being used on slightly. 145, being as tall as, makes it easily susceptible to low Attackers; however, this should not be seen as a drawback because normally, Stamina types are not to be used against Attack types. The other three are the TH170 (Beat Lynx), the 230 (Flame Byxis) and the 160 Spin Tracks (Guardian Leviathan), which are taller than the 145 track. TH170 outclasses it since its 170 has more Defense but does not wobble like 230.

Eternal Defense Sharp is a variant of Defense Sharp that moves freely. But it is very similar to Eternal Spike/Sharp with almost the same attributes. However, since it's an Eternal variant, it sticks out a bit more than Defense Sharp, this sometimes causes the tip to get stuck which will lose stamina. It is taller than Wide Defense, so it can be used to prevent floorscrapes with 85 and BD145 Spin Tracks.Unlike most Sharp variants, it has surprisingly great Balance. It has a metal bar that makes a sonic-like sound when it touches the Stadium floor. When the sharp part is worn out, it is not possible to go stamina. It will only act as a flat tip, with high chances of having a stadium out. Some EDS's have defects to them, causing them to spin around the stadium rapidly and tornado stall, similar to XF. This is a great tip for stamina-types. Although if you are going to use this tip for tournament play, it is strongly advisable you have more than 1 copy of it, because the tip is easily breakable. It is suggested to not use this tip in competitions due to its fragility, and B:D is just all around better. 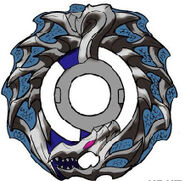 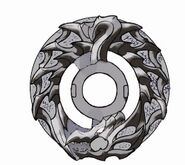 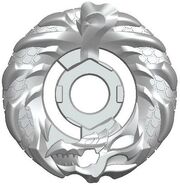 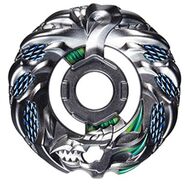 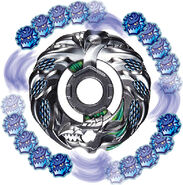 Add a photo to this gallery
Retrieved from "https://beyblade.fandom.com/wiki/Orochi_Wyvern_145EDS?oldid=369547"
Community content is available under CC-BY-SA unless otherwise noted.