The stone face shows Revizer and Orojya combined. Orojya depicts the mythical creature "Yamata no Orochi" or just "Orochi" which has 8 heads and 8 tails. Revizer depicts "Leviathan" which is a sea dwelling serpent. The Stone Face shows Leviathan facing to the left with a sinister grin. While with Orojya, it shows 3 heads of Orojya also facing to the left while opening it's mouth, showing it's fangs. It is a turquoise-ish in color.

Showing off quite the impression of being circular, Revizer carries many elements of its source material into its appearance. The most noticeable would be the Revizer's head that is resting atop of the Warrior Wheel with a menacing expression. The tail of the legendary creature follows this as it whip-lashes and circles the entire Wheel. Some subtle wave-pool and oceanic designs are then carried to other distinguishable areas but does not fail to showcase some holes here-and-there.

Being the almost-circular Warrior Wheel that it is, two holes at two of its sides stop it from achieving the perfection. These holes are formed by the sea-riding waves details that can be visualized additionally as yet another leviathan raising its jaws. It is light blue with green stickers.

This Warrior Wheel consists of a ring circled by multiple snakes. These engraved serpents create small protrusions all around Orojya, like a gear. Following the characteristic of all Shogun Steel Beyblades, Orojya has a hole for the Element Wheel's orb to protrude into, and two snake heads encase it from each side with their fangs. Some swirly designs exist in the inner part of this Warrior Wheel, all the way down to the opposite side of the crystal, where a menacing face is formed. Made to resemble a snake's head in a front view, two evil eyes are engraved as well as small fangs near the edge of Orojya, and that big head's apparent mustaches are prolonged to become the many small serpents encircling the rest of the Warrior Wheel. This wheel could be useful for defense in the synchrom combo MSF-H/MSF Orojya-Killerken GB145/ED145RS/CS. Also most parts are covered by serpents and/or sea snakes. It is turquoise in color.

T125 has four upward-facing wing protrusions spaced apart widely. The Track is designed to work in a similar way to DF145, although the effect it produces is negligible. The performance of this Track is similar to D125, and as a height, is generally overshadowed by CH120.

JB is of the "Ball' series of bottoms, and is most similar in size to WB. What is unique about this Bottom is the tiny spikes all over its round surface. These reduce the amount of surface area touching the stadium, making it less effective for Defense than WB. JB has found above-mediocre use in one combination only, which is a Left-Spin Destabilizer Combo: L Drago 100JB. 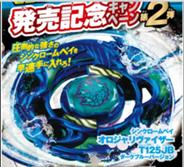 Orojya Revizer with stickers on