The Pegasus I Face Bolt depicts "Pegasus", the magical winged horse that soared into the heavens for the Greek god, Zeus. Pegasus is one of the 88 constellations in space. The design features the head of Pegasus, appearing white with pupil-less eyes, along with its snout. It also shows Pegasus' two ears, with a long mane alongside a shorter one, sprouting from its head in a lightning bolt-like manner. There are also curved details next to the ears, which are outlined. Next to its head are the stylized letters "P" and "S".

The Cyber Pegasus 105F variant has a filled in "P" and "S". The Face Bolt included with the Beyblade Legends release of Storm Pegasus 105RF is printed and features a yellow head instead of white.

The Pegasis Wheel consists of a three-winged design. Each of the three sections has a flat front that connects the protrusions. The segments slightly curve upwards in the shape of wings, with two pointed ridges near the end. Hoove-like parts can also be observed in the design.

Semi-Flat (SF) is a sharp tip with a flattened end. As a result, Semi-Flat displays a combination of Attack and Stamina qualities, moving in a semi-aggressive pattern. Because of this however, the two attributes are compromised, resulting in an average performance in both categories.

Semi-Flat produces a movement pattern that, while aggressive, is much slower than any flat Performance Tip. The increased friction with the stadium floor due to the wider tip both increases its Defense and Stamina in comparison to a bottom similar to Spike (S) or Eternal Spike (ES). However, it is in absolutely no competition with Performance Tips such as Wide Defense (WD) for Stamina or Rubber Spike (RS) for Defense.

Semi-Flat found a niche use in Destabilizer combinations, where a low Spin Track combined with Semi-Flat's balanced qualities allowed the Beyblade to destabilize the opposing Beyblade. 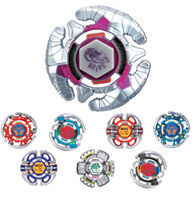