The Legend and the Evil Combine

It was created after Gingka Hagane's capture by DNA, and the Pegasus Warrior Wheel and Right Rubber Flat (R2F) were subsequently given to Kira Hayama. 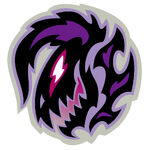 The Shogun Face Bolt depicts "Bahamut" or "Bahamoot", a legendary creature from Arabian mythology. The Bahamut is traditionally portrayed as a sea monster (gigantic fish, whale or sea serpent), but is typically designed in modern media with a dragonic or demonic appearance. The design also resembles Behemoth, as Bahamoote is the evolution of Behemoth in the Shogun Steel manga.

As with all Shogun Face Bolts, the Hasbro release is cross-shaped rather than the round diamond shape of its Takara Tomy Stone Face counterpart.

Bahamoote is a large, round Warrior Wheel with a large amount of hollow space interrupted by ribs, similar to Gargoyle. The Bahamoote Warrior Wheel is the widest Warrior Wheel ever released, and features jagged protrusions and gaps throughout the design. The head of the Bahamut is at the top of the Warrior Wheel, with various protrusions representing its claws and wings.

Pegasus is the Warrior Wheel successor to the 4D System Fusion Wheels Cosmic and Wing, and as such bears a resemblance to both. A three-winged design with interlaced feathered wings comprises most of the Warrior Wheel, retaining the motif of previous Pegasus Fusion Wheels. Three smaller wings form protruding hook-like knots in the design, each placed at equal distances from the others. Two Pegasus heads with their neck circle the inner portion as well.

Spike 230 (SP230) is the third Spin Track of the 230 height, and resembles Elevator 230 (E230) and Boost Disk 145 (BD145), with a wide fixed disk that has four downward facing spike protrusions. These spikes are intended for Attack, although they provide little in terms of performance. The wide disk is designed to prevent KOs by forcing the Beyblade upright and acting as brakes by creating a second contact point with the stadium floor.

Right Rubber Flat (R²F/R2F) is an upgraded version of Rubber Flat (RF). While retaining the same basic appearance, the Performance Tip, instead of being flat, features six curves going in a right-ward motion, giving it a star-like shape. This provides the Beyblade with fast and much more aggressive movement and speed than that of RF. This is due to the added friction that is created as a result. However there is a downside; despite its fast movement, it has low Stamina, much lower than that of RF. When first used, Right Rubber Flat will be too fast and hard to control, so it is recommended that a Blader wears it down with a few practice battles for it to become more controllable.