Pegasus Jumper is a Stealth Battler part of the Beyblade: Extreme Top System. It is based on the Galaxy Pegasus W105R2F re-colour and was released on January 2012 in North America. 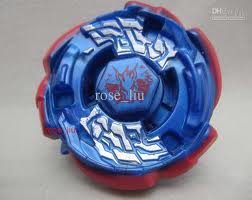 Pegasus Jumper resembles its regular counterpart, Galaxy Pegasus W105R2F but features a dark blue opaque variant of Pegasus II with silver highlights and three square-like holes around, while its Face Bolt is an opaque blue with a printed, red Pegasus motif. Its Fusion Wheel resembles Galaxy but is primarily blue, with the wings painted red. Underneath, there appears to be silver and blue protrusions, and various blue wings. Pegasus Jumper also showcases a blue WD-like Performance Tip, with three protrusions around it. As Pegasus Jumper's main gimmick is the ability to "launch a surprise jumping attack to slam opponents", as its lower half springs down to increase its height, reveal its hidden wings and thus, jump. However, if it is hit hard, it will get knocked back and then jump, knocking itself out or causing it to fly over stadium walls. 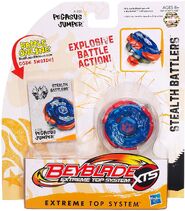 Add a photo to this gallery
Retrieved from "https://beyblade.fandom.com/wiki/Pegasus_Jumper?oldid=363663"
Community content is available under CC-BY-SA unless otherwise noted.