The Genius Blader, King, Joins In!!

Phantom Orion B:D is a Stamina Type Beyblade that appears in Beyblade: Metal Fury. It was released on September 17, 2011 in Japan. It is owned by Chris. 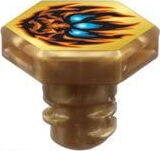 The Face Bolt depicts "Orion", one of the 88 constellations. It is known as the winter constellation. In Greek mythology, Orion or "The Hunter" was a giant huntsman who died at the hands of the giant scorpion, Scorpio, and was placed as a constellation in space along with Scorpio by the God of Sky and Thunder, Zeus. The version on the face, however, depicts 'The Phantom' also known as Orion.

Orion is burgundy in color, with designs of notches on its end. Orion has sharp spikes on its sides which are meant to repress the top half of Orion's face. Phantom Orion also comes with eye-like stickers for the Energy Ring, which when put together with the Phantom Fusion Wheel makes a grin or face.

Phantom's Metal Frame is a wide and circular Wheel with a large circular hole for the Core to fit into place. It is very thick and has a smooth rounded outer side with four blue spheres. These blue spheres represent the Orion constellation, and are put in a manner that resembles it. On the front, it showcases a devious grin with visible sharp teeth, and a nose that can be used with the Orion Energy Ring eye stickers, to create the grinning face. It can also be flipped over to switch from Stamina Mode to Attack Mode, but Stamina Mode is recommended. The beys metal frame also has potential in attack mode which ties up to Fang leones counter attack mode. So this bey is great for stamina and attack.

The Core is a translucent purple made of complete plastic, which makes this a PC Core of some sort. Due to this, it provides the least amount of weight from the center, allowing for maximum Stamina potential. Because the Metal Frame is a smooth metal outer side of the Wheel, it allows it to focus all of the weight on to the outer-side of the Wheel. This gives it the best Stamina it can achieve. In design, the Core resembles somewhat of a miniature version of Scythe and being round as a whole. Although initially, it was assumed that B:D was the cause of Phantom Orion's superb Stamina, after testing this was proven to be true but not completely. Phantom, along with B:D, was the cause of its amazing Stamina due to its Core, which focuses weight onto the outer-side of the Wheel. In addition, Phantom does carry resemblances to Burn.

In that, the Metal Frame mimics that of the two bumpy indents on Burn's sides and that the weight is focused to the outer-side of the Wheel. It is even heavier than Burn with the metal frame alone, but Phantom does a better job at its weight distribution on the outer-side, especially with the weight increase. In Stamina Mode, the blue spheres from the blue, plastic Core as well as the Orion "face" are visible. In Attack Mode, they are not and the Wheel is more detailed with a hexagonal-shape and a multitude of protrusions and small indents that stick out for Attack potential.

Phantom is generally chosen for use in Stamina Mode, because in Attack Mode it suffers from recoil due to the jagged spikes and linear indents. However, despite the recoil from the jagged spikes and indents, Attack Mode still has use in Attack, Stamina and Balance Customizations. Phantom is quite a good Fusion Wheel, being able to defeat Wheels such as Hades and Twisted with ease and out spinning Scythe. Phantom is gaining great results and is best used in the combos MF-H Phantom Orion TH170D, MF-H Phantom Orion AD145WD, MF-H Phantom Aquario TH170D, MF-H Phantom Bull AD145WD, Phantom Aquario TH170D, and Phantom Bull AD145WD. Like stated above, the metal wheel should be in Stamina Mode. This is the reason why it has extraordinary stamina. If Blitz and Variares are the most versatile Attack-Type wheels, and Diablo and Basalt are the most versatile Defense wheels, then Phantom and Scythe are the most versatile Stamina-Type wheels.

Bearing Drive (B:D) is a 4D Bottom with a height comparable to Spin Tracks at a 170 height. As the name suggests, Bearing Drive features internal ball bearings that support the free spinning tip and allows it to spin for long periods of time with minimal friction. Inside its plastic casing is a metal shaft connected to the middle of the 4D Bottom, a metal casing that is connected to the base, and metal ball bearings between them. When the Beyblade tilts or has low spin power, the base makes contact with the stadium floor and stops, while the ball bearings reduce friction.

These ball bearings may occasionally stop the shaft from spinning, resulting in less friction between the stadium floor and itself. These factors increase Stamina, but there are many mold variations even within the same distributing company (Takara Tomy, Sonokong, and Hasbro) and general inconsistencies make this a rare occurrence. Bearing Drive can regularly spin for between 2 to 5 minutes, with the longest times being over 7 minutes.

However, this interesting 4D Bottom reminescent of HMS' Bearing Cores has two weaknesses. Firstly, since its central focus is on Stamina, Bearing Drive remains very easy to knock out of the stadium, with its tip being similar in shape to Performance Tips such as Wide Defense (WD). Secondly, while its height is not a considerable disadvantage, the tall height is vulnerable to various Attack Type combinations.

How the ball bearing works.

Phantom Orion in the anime.